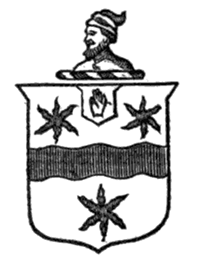 The Fundamental Constitutions of Carolina of 1669 outlined an idealistic version of feudalism as the intended form of government for the colony under Proprietary rule. The Lords Proprietors had the power to create a hereditary peerage in Carolina. Forbidden to use the same ranks of nobility that were used in England, the Proprietors chose the title of "landgrave" (a German designation, approximately equal to a count) as the highest rank and the title of "cacique" (sometimes spelled and pronounced "cassick") as the lower rank. The latter term derives from a West Indian aboriginal word meaning "chief" or "headman." In addition, the eldest Proprietor was to have the title of "palatine" and would preside over governmental meetings.

The title "baronet" was a rank of honor or dignity created in England by James I in 1611. It was not an order of the peerage but ranked below a baron and above a knight and was the lowest inheritable order in Great Britain. Held by commoners, it was "intended to give rank, precedence, and title without privilege." In colonial North Carolina there were several baronets, among whom were Sir Nathaniel Duckenfield, Sir Richard Everard, and Sir John Yeamans.

In the settling of Carolina, landgraves were to be granted four "baronies" (48,000 acres) and caciques two baronies (24,000 acres) in each county as it was created, and they were strictly limited in their right to dispose of the land other than by lease. Originally, there was to be one landgrave for each county, and twice as many caciques as landgraves. In practice, more landgraves than caciques were appointed.

Under the Fundamental Constitutions, the nobles were intended to have legislative and judicial powers in Carolina; however, this system was never really implemented and the powers and titles of the nobles were mainly on paper. South Carolina had 26 landgraves and 13 caciques, whereas North Carolina had only a few of each. Most landgraves and caciques apparently remained in England; of those who immigrated to the New World, few settled permanently in North Carolina. Among Carolina nobles, Sir John Colleton, Robert Daniel, Charles Eden, Christoph von Graffenreid, and Sir John Yeamans were landgraves; John Gibbs, who unsuccessfully claimed to be governor of North Carolina, was a cacique. Of "upwards of 800,000 acres" granted to landgraves and caciques in South Carolina, less than 10,000 acres had been "taken up or ascertained" when that province became a royal colony in 1719. The lack of nobles in Carolina was one of the reasons that the plan of government under the Fundamental Constitutions failed. After several revisions, the Fundamental Constitutions were abandoned, leaving the Carolina nobility without an official role in government.

As late as 1726, a warrant for a landgraveship was granted to Col. Samuel Horsey; it was never taken up "by reason of the unsettled state of the province." References to caciques and landgraves are scarce in North Carolina after it became a royal colony in 1729, when seven of the eight Proprietors sold their shares to the Crown. Records are somewhat fuller for South Carolina, where the heirs of some of the original landgraves and caciques were embroiled in legal disputes over their old land grants for several years after South Carolina became a royal colony.

It is unclear what happened legally to the hereditary titles of Carolina's landgraves and caciques. The land rights of some were lost individually. In 1730 the grant of Sir Nathaniel Johnson, who became a cacique in 1686, was declared void by the attorney and solicitor general on the grounds that his grant from the Proprietors was so vague that it gave no description of the location of his lands and did not even state that they were to be in Carolina. Other grants lapsed when their holders died without heirs.

Aside from the potential rights to large land grants, the old titles of landgrave and cacique otherwise seem to have had little meaning or prestige as the eighteenth century progressed. At any rate, the 1776 state constitution forbade the granting or holding of titles of nobility by citizens of North Carolina, and the U.S. Constitution repeated this restriction on the federal level.

WoW!!!! My name is Craig Leviner & I'd love to find out where my names is in relations with your extensive research.

The last sentence above is

The last sentence above is not correct. The Constitution of the United States of America does not restrict citizens from possessing titles of nobility. The only legal restrictions to such honors are that the United States of America does not grant titles of nobility and those citizens holding elected offices and offices of trust are required to obtain approval to accept foreign honors which would include ennoblement. This latter being a preemtive solution to an obvious potential conflict of interest with nations who might day be in opposition to the United Statesof America.