Part 1: Introduction
Part 2: The Literary Fund, the Education Act, and the Growth of Common Schools
Part 3: The First Graded Schools, the State Constitution of 1868, and Legal Segregation
Part 4: Expansion, Consolidation, and the School Machinery Act
Part 5: Desegregation and Equality in Public Education
Part 6: Reform, Innovation, and the Modernization of Public Schools

Part 6: Reform, Innovation, and the Modernization of Public Schools 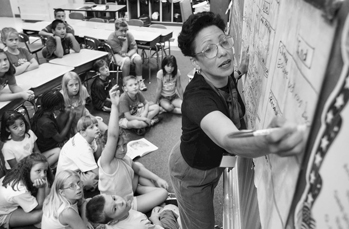 North Carolina's public schools continued to expand in the final decades of the twentieth century. The 1960s and 1970s saw a greater focus on early childhood education, with the statewide establishment of full kindergarten for all five-year-olds by 1977. Emphasis was increasingly placed on reform, improvements, and accountability of individual schools and county districts. In 1985 the General Assembly established, through the State Board of Education, the Basic Education Program (BEP). The BEP allocated funds for summer school, additional teachers, textbooks, and other vital needs. Under the program, a standardized curriculum, called the Standard Course of Study, was created to clearly outline grade-appropriate achievement levels in all subject areas, including the arts, grammar, mathematics, languages, science, communication skills, physical education and personal health, social studies, and technology.

The public education of Native American children was energized in 1988, when the State Board of Education determined to explore the problems faced by Indian students in grades K-12. The State Advisory Council on Indian Education works with tribal organizations; advises the State Board of Education; coordinates the administration of federal, state, and local educational programs; and advocates on behalf of Indian students, often designing new initiatives to lower the dropout rate and increase academic achievement. The advisory council has recommended the statewide adoption of textbooks that portray American Indians more fairly and accurately, the elimination of school mascots and logos that demean the Indian population, and the creation of an American Indian Studies elective in North Carolina high schools, especially in districts that serve a large Indian population.

In 1979 the General Assembly reorganized the North Carolina Department of Public Instruction and passed the School Improvement and Accountability Act, which gave flexibility and added responsibility to local schools in the development of improvement plans and the attainment of measurable goals. The grassroots paradigm, in which the greatest advances come from the efforts of the entire community (especially parents), drove many school reforms beginning in the early 1990s. Local schools also began to be "graded" by a State Report Card, issued annually since 1990. Various end-of-grade and other standardized tests were initiated to measure student progress in basic subjects such as writing, mathematics, and reading.

Other programs created in the 1990s included Smart Start (1992), to improve and increase the availability of childcare programs statewide, and the ABCs of Public Education (1996), to strengthen local control of schools, improve school accountability, and facilitate the teaching of the basic " ABCs" of education: reading, writing, and mathematics. The ABCs program, which has covered all North Carolina public schools from kindergarten to twelfth grade beginning in the 1997-98 school year, offers schools financial incentives for ensuring student achievement, measured by end-of-year tests. The staff and teacher assistants at successful schools receive financial bonuses for their efforts.

In 1993 the North Carolina A+ Schools Program was initiated by the Thomas S. Kenan Institute for the Arts (an affiliate organization of the North Carolina School of the Arts) to provide a unique educational experience employing interdisciplinary studies and consistent exposure to the arts. The program, sponsored by private foundations and corporations, such as the Z. Smith Reynolds Foundation, the Wachovia Foundation, and Philip Morris Companies, Inc., was conducted by school personnel and arts professionals. A+ schools covered the Standard Course of Study through an integrated, experiential approach to learning that relied heavily on drama, dance, music, and the visual arts. The program has the advantage of allowing motivated students to learn at their own pace and in ways suited to their individual talents and goals. In 2001 the state's original 25 A+ schools reported that many students had shown improved focus, discipline, academic growth, and achievement since their enrollment in the program. In 2003 the A+ program was moved from the Kenan Institute to the University of North Carolina at Greensboro.

State funding of public schools remains controversial in North Carolina. In 1997 the state supreme court ruled in Leandro v. North Carolina that "every child of this state" is constitutionally entitled to "a sound basic education in our public schools." The case was originally filed by the school boards of Cumberland, Halifax, Hoke, Robeson, and Vance Counties and some resident families. The plaintiffs maintained that inadequate state funding of poorer school districts denied their children the same quality of education enjoyed by children in wealthier districts. The court's rulings in Leandro continue to inform state decisions on the equitable funding of public school districts.

The General Assembly passed the Excellent Schools Act of 1997 to improve the quality of school personnel and administrators by raising salaries, upgrading training, and increasing the accountability of individual teachers. Student achievement was specifically addressed in 1999, when the State Board of Education established Student Accountability Standards, applied through end-of-year tests to determine a student's readiness to move on to the next grade. This was the first time elementary school, middle school, and high school students in North Carolina were required to meet statewide measurements for promotion. These tests also provide specific data on the so-called achievement gap between white students and minority students (African American, Latino, and American Indian). In 2000 the Advisory Commission on Raising Achievement and Closing Gaps was formed to address the gap between the highest and the lowest achievers. The 2002 No Child Left Behind Act increased the federal role in public education nationwide. Programs resulting from this legislation emphasize closing the achievement gaps among various social and ethnic groups and increasing the accountability of individual schools that may not be adequately serving minority populations.

Greater school choice within the public school system-particularly in the case of poorer, less successful schools and school districts-became the battle cry of many North Carolinians in the 1990s and early 2000s. The General Assembly joined a national movement when it passed the Charter Schools Act of 1996, which authorized up to 100 new charter schools. Such schools offer parental choice with open enrollment; they have more flexibility than public schools but must comply with federal and state guidelines. Although they can be established by any individual, group, or nonprofit corporation, they must remain nonsectarian and employ at least three teachers. Charter schools, which average fewer than 150 students, often focus on a particular theme (e.g., math and science, the arts, character education, or specific teaching methodologies) or on at-risk or other special populations. Magnet schools-public schools that have a special focus, such as art, technology, or language, or use a unique teaching paradigm-also saw dramatic growth in North Carolina, as did homeschooling, in which parents are required to follow state and national standards.

In 2003-4, according to the North Carolina Department of Public Instruction, the state had 115 public school districts, in which 2,171 public schools enrolled 1.33 million students and 93 charter schools enrolled 21,903. The racial composition of students included about 416,000 African Americans, 19,000 American Indians, and 88,355 Latinos. Of graduating high school seniors in 2003, 48 percent reported plans to enroll in four-year colleges or universities; 34 percent, to enroll in two-year colleges; 9 percent, to enter the workforce; and 4 percent, to enter the military. North Carolina public schools had a total operating budget of approximately $8.8 billion, about 93 percent of which came from the state and local governments. The public school system lagged behind the national average in some categories, including SATscores (1,007 vs. 1,026 nationwide) and teacher salaries ($43,076 vs. $45,891 nationwide).

Hugh Victor Brown, A History of the Education of Negroes in North Carolina (1961).

Davison M. Douglas, Reading and Writing Race: The Desegregation of the Charlotte Schools (1995).

Linda Flowers, Throwed Away: Failures of Progress in North Carolina (1990).

Marcus C. S. Noble, A History of the Public Schools of North Carolina (1930).