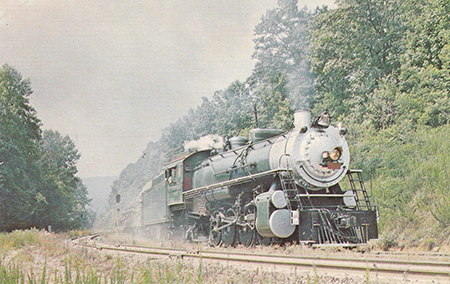 Saluda grade, the steepest standard-gauge main line railway grade in the United States, crests in the center of the Polk County town of Saluda. Since it opened in 1878, the three-mile-long stretch of track has earned a prominent place in railroad lore, owing chiefly to the wild train runaways that have taken place there over the years.

Rising an average of 4.7 feet per every 100 feet in length, the Saluda grade far outdistances its nearest rival, the 3.5 percent Santa Fe grade in New Mexico. Construction of the line in the 1870s marked the first use of state convict labor on a large scale, although the high casualties among the workforce prompted a special legislative investigation. The first train made its passage up the mountain on 4 July 1878. Originally built as part of the Asheville & Spartanburg Railroad, the grade was taken over by the Southern Railway (later Norfolk Southern) in 1895.

Both during and after construction, the grade was the scene of numerous accidents, many resulting in death or injury to train crews. In 1880 alone, 14 men were killed on the Saluda grade; in 1886 a runaway train killed 6 convicts, 2 guards, and a foreman. The summer of 1903 saw no less than three separate crashes. Most train derailments took place at Slaughter Pen Cut near Melrose about halfway down the mountain, where trains would often skip the tracks. The last major incident occurred in 1964.