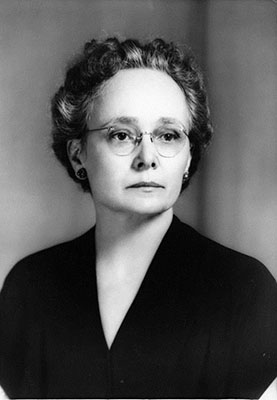 Having remained steadfast to the family farm at Haw River while her husband was com­missioner of agriculture, Mary Elizabeth White Scott looked forward to the role of first lady in 1949. For eleven years, William Kerr Scott had served the citizens as commissioner before running for governor. During this time, "Miss Mary," as he affectionately called his wife, had been keeping the books and managing the dairy farm of thirteen hundred acres, as well as raising their three children: Osborne White, born September 27, 1920; Mary Kerr Scott, October 10, 1921, who later married Alfred Johnson Lowdermilk Jr.; and Robert Walter, June 13, 1929, who later married Jessie Rae Osborne.

One of seven children, Mary Elizabeth White was born on April 30, 1897, to the farming family of James Richard and Elizabeth Ann Sellers White. Living only a short distance from the Scott farm, she and her future husband walked to school and attended church and com­munity activities together. After Mr. Scott spent two years in the army during World War I, he and Mary were married on July 2, 1919. They established their farm on 225 acres given to them by his father and lived there in an expanded three-room log house that they moved from her family's farm.

Mary Elizabeth White taught for a year to earn money to attend State Normal and Industrial College in Greensboro (now the University of North Carolina at Greensboro), where she took teacher training courses. She then taught at Woodlawn School in Alamance County, Anderson School in Caswell County, and at Taylorsville in Alexander County.

When time permitted, she enjoyed her hobbies of knitting, crocheting, and reading (from comics to Plato), but there was always time and the need for her favorites - gardening and cooking. Friends, extra family members, and business associates were often guests at mealtime. Mary Scott's experiences during her years of teaching, church activities, work with home demonstration clubs, and as a charter member of the first North Carolina 4-H club readied her for a lifetime of leadership. She worked with others in her community to bring about rural electrification, good health practices and medical care, and rural telephone service. Without those basic improvements, as well as roads on which to transport goods to market, farms and rural communities would not grow and prosper.

The Winston-Salem Journal of April 26, 1972, pointed out that Mary Scott's "spirit and energy made her exceptional at a time when the world of politics considered most women ornamental, more for display than consultation. But she took pains to keep her influence a pri­vate matter and to remain part of the background as her husband's career reached out...." Mr. Scott's first political race was for state commissioner of agriculture. He came home as often as he could but left the management of the farm-keeping financial records, registering pure­ bred cattle, and repairing equipment - to his wife. She still made time, however, to attend national and regional meetings with him. When her husband decided to run for governor, she was there when he needed her, working tirelessly behind the scenes. All of those experi­ences helped prepare her for the role of first lady. Her ability to get things done, organize, man­age financial matters, and make decisions on her own would stand her in good stead in Raleigh.

While first lady, "Miss Mary" made everyone feel at home and relaxed in the Executive Mansion. Her personal graciousness and charm were ever present. Having entertained a vast variety of guests in their Hawfields home, Mary Scott was at ease with preparing food and managing a household. In addition, she had the ready assistance of Laura M. Reilley, manager and hostess, as well as seven prison­ers assigned to the official residence. During Governor Scott's four years in office, more than 225,000 people visited the mansion.

Mary Scott unexpectedly faced having to renovate and refurbish the Executive Mansion. The building had not been well maintained during the previous twenty-five years because of the world wars and the depression. After a review by the legislature and an outstanding committee of architects from State College's School of Design, fifty thousand dollars was appropriated for improve­ments. Updating the kitchen, repairing the leaking roof, and replacing exterior woodwork were the major renovations. The refurbishing of draperies, carpets, and furniture was under­ taken with the consultation of interior decorator Anna Riddick.

Two years after leaving the Executive Mansion, Mary Scott made a home for herself and the newly elected senator in a suite at the Carroll Arms Hotel in Washington, D.C. Viewing and listening from the Senate galleries, she learned about the great needs of the country and how the national government worked. She became active in the Senate ladies group that pre­ pared bandages for the Red Cross and met to discuss issues of interest. That group was a ready source of social engagements and for making new friends and reestablishing old ones. Senator and Mrs. Scott always enjoyed visits from their constituents and even invited the Hawfields Presbyterian Church elders and deacons to meet in the Capitol dining room. Their tenure in Washington, D.C., was cut short when Senator Scott died in 1958. 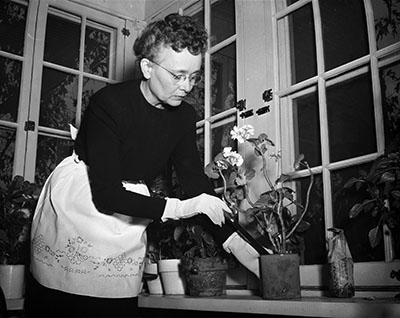 Mary Scott returned to Melville Farms in Alamance County to enjoy her grandchildren and her beloved com­munity. She was also active with appointments to the State Board of Health and the North Carolina Hospitals Board of Control. She received many honors, including being named "Woman of the Year" by the Progressive Farmer in 1949 and the state Grange in 1951, an award of merit from the American Red Cross in 1952, and the Distinguished Service Award of the National Arthritis and Rheumatism Foundation in 1966. North Carolina State University recognized her in 1970 for her lifetime of contributions to the people of North Carolina. At Western Carolina University a dormitory was dedicated and named in her honor.

When Mary Scott, almost seventy-five years old, died of pneumonia on April 23, 1972, her son, then governor Robert Walter Scott, received friends at the Executive Mansion. The ser­vice and burial were at her beloved Hawfields Presbyterian Church and Cemetery. "Mary, the Queen of Scott's Land" was so admired that Secretary of State Thad Eure had the state flag flown at half-mast in her honor. A Raleigh News and Observer editorial of April 25, 1972, declared: "She was a quiet, gracious and strong woman who believed public service an obli­gation and thought principled conduct an unremarkable expectation." A North Carolina State University resolution, quoted in the same issue, praised her further: "In her many careers as teacher, mother, advisor to governors, and leader among her people, Mary Scott stood in the fullest sense for the great American dream of making the most of oneself to the betterment of others." Even in her last will and testament she continued to think of her cherished commu­nity, leaving sixty-two acres to Hawfields Presbyterian Church "to he used for the purpose of providing a rest home for the aged and needy of the Hawfields Church community." Such was the spirit of Mary Elizabeth White Scott.