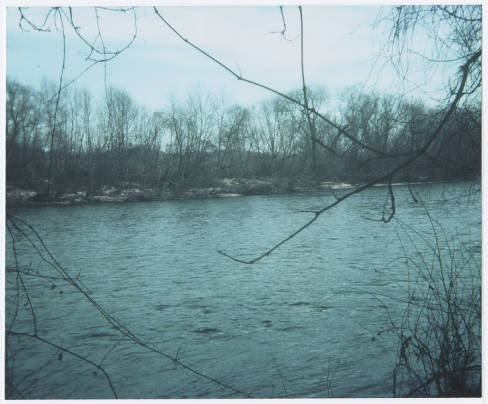 Shallow Ford, a rock-bottomed crossing point on the Yadkin River, was the site of several important events in North Carolina history. The ford was used by settlers and traders in the region from about 1750 until about 1920, when highways and bridges rerouted traffic. The course of the Yadkin River at this point forms the boundary between present-day Forsyth County and, to its west, Yadkin County. The Shallow Ford crossing is approximately 600 yards south of the modern bridge on the Huntsville-Lewisville road.

Shallow Ford was an essential link on Great Wagon Road, the frontier road used by immigrants to backcountry North Carolina in the mid-eighteenth century. On 14 Oct. 1780 about 300 Whigs, led by Joseph Cloyd, engaged a similar number of Tories, commanded by Gideon Wright, in a battle near Shallow Ford. The Whigs included about 160 Virginia troops and 140 militiamen from Surry and Rowan Counties. The battle, lasting several hours, ranged over an area that included present-day Huntsville. Fifteen Tories and a single Whig, a captain in the Virginia militia named Henry Francis, were killed in the Whig victory. A tributary of the Yadkin River took the name Battle Branch from this encounter.

On 17 Feb. 1781 Lord Charles Cornwallis's army of 2,500 to 3,000 men crossed the Yadkin at Shallow Ford in pursuit of the American force commanded by Gen. Nathanael Greene. The two armies would meet five weeks later, on 15 Mar. 1781, at the Battle of Guilford Courthouse. A minor engagement resulted from the February 1781 crossing. Joseph Graham's company of Whigs met with the column of Cornwallis's troops en route from Shallow Ford to Salem and, in the conflict, lost one man and had five taken prisoner.

On 11 Apr. 1865 Union cavalry under Gen. George H. Stoneman skirmished with Confederates at Shallow Ford. Moving east from Tennessee across western North Carolina, Stoneman's immediate objective was to destroy factories in Salem engaged in making clothing for southern troops. The detachment that crossed the Yadkin River numbered about 5,000 men. Militia posted at the site stood little chance of slowing their progress. Union accounts state that the Confederates offered "feeble resistance" and fled, leaving behind 100 new muskets.

In 1913 the North Carolina Chapter of the Daughters of the American Revolution placed a series of markers designating a "Daniel Boone Trail" from North Carolina to Kentucky. Two markers were erected at Shallow Ford and another at Huntsville near the John Kelly Tavern building. The state government placed markers dedicated to Shallow Ford and Stoneman's Raid in 1938 and 1941, respectively. These signs were later relocated to sites near the Huntsville-Lewisville bridge.