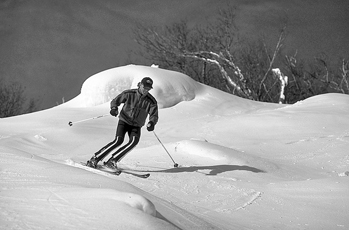 From its modest beginnings, snow skiing has grown into an important part of the economy and culture of western North Carolina. Skiing on snow has been practiced in northern Europe for over 4,000 years but did not become a recreational pursuit until the late nineteenth century. The two main types of competitive skiing include Alpine, or downhill, skiing and Nordic, or cross-country, skiing. Exactly when snow skiing was first practiced in North Carolina is unknown. A photograph appearing in North Carolina: A Guide to the Old North State, published by the Works Progress Administration in 1939, shows a group of skiers on an unnamed snow-covered hill in Banner Elk. An article in The State magazine claims that the first organized ski club in the South was organized in 1940 at Lees-McRae College. Certainly by the 1950s, snow skiing was becoming a popular pastime in western North Carolina. Skiers were engaging in Nordic skiing on Clingman's Dome in the Great Smoky Mountains National Park, while downhill skiers at Roan Mountain were discussing erecting a tow rope as early as 1951. In addition, there were people skiing along the slopes of Mount Mitchell, and several individuals there supported an effort to get the state to develop a lodge and snow skiing facilities.

Organized commercial ski operations began in North Carolina in December 1961, when Tom Alexander opened the Cataloochee Ski Slopes in a pasture on a hillside behind his ranch in Haywood County. The name was soon changed to Cataloochee Ranch and Ski Area. Alexander utilized snow-making equipment, at the time in its early stages of development, to produce snow on his pasture. For his efforts, Alexander is often referred to as the "Father of Southern Skiing." 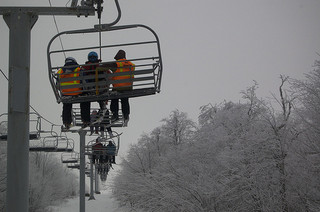 At Blowing Rock, Bill Thalheimer led an effort to create the state's first commercial ski operations, but bad weather hampered construction, and it was not until the spring of 1962 that his slopes opened to the public. The Blowing Rock Ski Lodge (modern-day Appalachian Ski Mountain) between Boone and Blowing Rock featured three slopes serviced with tow ropes and the first T-bar type lift used in North Carolina. This also was the first facility in the state equipped with lights for night skiing.

In 1964 Grover, Harry, and Spencer Robbins, brothers active in development efforts in western North Carolina, opened two small ski slopes at Hound Ears Club near Boone. Though small in scale, their operation drew rave reviews. Other small-scale resorts opened in the mid-1960s, including Sapphire Valley near Cashiers and High Meadows near Roaring Gap.

Efforts to create the ski complex that became Seven Devils began in 1964. Six investors from Winston-Salem acquired 1,288 acres in Avery and Watauga Counties. Seven Devils finally began snow skiing operations in the spring of 1967. One of the most influential individuals in the snow skiing enterprises in western North Carolina was Tom Brigham, a dentist from Birmingham, Ala., whose goal was to create a ski resort in the South along the lines of the famous New England resorts. Brigham began searching for a location for his southern ski resort in the late 1950s. After studying numerous sites, he settled on the Banner Elk area and began purchasing land at Beech Mountain in 1961. By 1962 trails had been cut, but an economic downturn dried up financing.

The project advanced little until 1966, when Brigham joined forces with the Robbins brothers of Hound Ears fame. They set out to build what was dubbed the "Disneyland of Southern Skiing." By December of 1967, Beech Mountain was open, deemed to have the highest skiing in the East and featuring the region's first cabin-type gondola lifts. Brigham moved on in 1968 to begin development of another ski area, Sugar Mountain. Located between Linville and Banner Elk, this 3,000-acre resort opened in the fall of 1969. Major features for the site included the distinction of having the "greatest vertical drop south of New England" (1,200 feet).