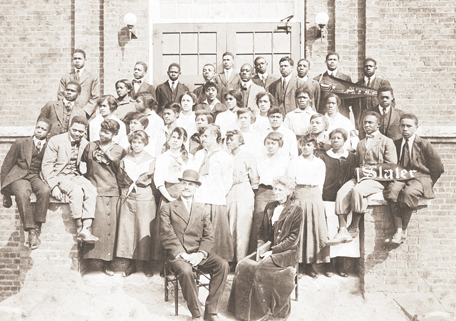 Slater requested that teacher training receive priority. Schools that did the best work in preparing black men and women to teach black children-thus helping as many schools at all levels possible-were targeted for funding, along with those schools that recognized and introduced industrial training. The fund supported improvements in salaries and facilities.

The fund's first connection to North Carolina was made through Simon Green Atkins, founder and principal of Slater Industrial Academy, which was established in honor of Slater in September 1892. The school grew and eventually became Winston-Salem State University (1969). A second connection between the Slater Fund and the education of North Carolina blacks was the work of Nathan Carter Newbold. In 1913 Newbold became the state's first director of black education, a position created by funds from the General Education Board. Following a state educational survey, in 1920 Newbold outlined to the State Board of Education a plan to create an entire Division of Negro Education. The plan was approved, $15,000 was appropriated by the General Assembly, and Newbold was named division director, serving for 37 years until his retirement in 1950. Under his leadership, black education experienced remarkable growth in the 1920s, and the idea of publicly supported black schools gained wider acceptance. As a result of his close work with philanthropies, moneys from the Slater and Jeanes Funds, as well as the General Education Board, were utilized efficiently and effectively.

The Slater Fund also was used to establish the state's County Training School System in 1911. The fund agreed to appropriate $500 if counties would match it with $750 and aim to stretch the school session to ten months out of the year. In all, the Slater Fund contributed more than $15,000 to this system, primarily funded through the public schools. One school in each of several counties was selected and called a county training school. Besides offering some of the usual secondary school courses, these schools offered useful industrial courses and some simple teacher training courses. At one time there were nearly 50 such schools; these in time became standard or accredited high schools.

Between 1882 and 1937-when the Southern Education Fund was formed by the merger of the Slater, Jeanes, Peabody Education, and Virginia Randolph Funds-African American institutions in North Carolina received a total of more than $600,000 from the Slater Fund.

Hugh V. Brown, A History of the Education of Negroes in North Carolina (1961).