Society for the Propagation of the Gospel in Foreign Parts 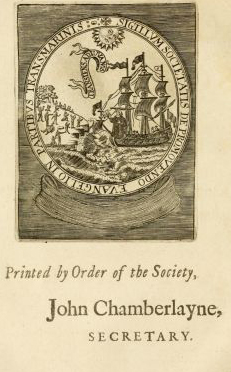 King William III's grant of a charter to the Society for the Propagation of the Gospel in Foreign Parts (SPG) on 16 June 1701 brought to fruition the designs of Thomas Bray, Bishop Henry Compton, and other leading English churchmen to foster and support Anglican missions in colonial British America. A pioneering voluntary association of interested clergy and laity, the SPG sought initially to recruit missionaries for work among Native Americans and African Americans. When these ventures proved unsuccessful, the society focused its attention upon white settlements. With funds derived from members' annual subscriptions and special collections, the SPG during the eighteenth century employed well over 300 Anglican clergy and schoolmasters willing to undertake overseas assignments. It thereby greatly aided the bishop of London in discharging his extradiocesan responsibility for the spiritual welfare of Britain's colonial possessions and provided the impetus and organization for overseeing the expansion of the Church of England both in newly settled areas such as the Carolinas and Georgia and in the dissenter strongholds of New England and the Middle Colonies.

Daunting obstacles-climate, hazardous travel, an ethnically and religiously heterogeneous population, dispersed settlement, cultural impoverishment, and social and political instability-meant that the hopes of a flourishing and encompassing Anglican Church in North Carolina were often dashed. John Urmston, an early missionary, graphically described the colony as "this hell of a hole." But what success there was in forming and sustaining Anglican congregations came largely through the efforts of the SPG and its clergymen.

Henry Paget Thompson, Into All Lands: The History of the Society for the Propagation of the Gospel in Foreign Parts, 1701-1950 (1951).

From the backcover of An account of the Society for Propagating the Gospel in Foreign Parts, established by the Royal Charter of King William III. With their proceedings and success, and hopes of continual progress under the most happy reign of her most excellent majesty Queen Anne (1706). Image courtesy of the Internet Archive. Available from https://archive.org/details/accountofsociety00soci (accessed June 6, 2012).

This should record that the

This should record that the SPG were famous slave-owners in Barbados - receiving £8558 sterling (perhaps $3m today in labour value) in 1836 for 410 enslaved people it "owned" on its Codrington Estate. (See The Pri ce of Emancipation, Nicholas Draper, Cambridge 2010, p 154-5.