Stagecoaches, drawn by teams of two to six horses, were public vehicles that ran scheduled, long-distance routes between designated towns by changing horses at predetermined stops. They took their name from the fact that they undertook journeys in stages, usually 10- to 15-mile laps. By extension, the word "stage" came to refer not only to these laps but also to the places where the coaches stopped and even to the vehicles themselves. In the colonies, stagecoaches began as heavy wagons with backless benches; flat roofs supported by posts left the sides open except in bad weather, when leather curtains could be rolled down. Wagon bodies gradually gave way to more boxlike, closed vehicles. Stagecoaches improved in the 1810s, when egg-shaped vehicles, suspended on leather straps mounted on frames, became the norm. 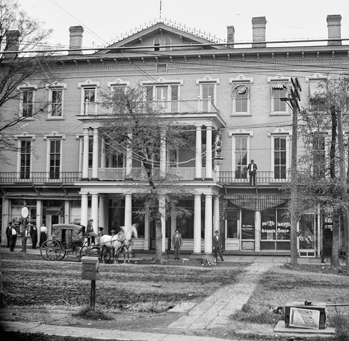 Stagecoach travel in North Carolina began just after the American Revolution. In 1786 a traveler from Suffolk, Va., to Wilmington, N.C., reported that "the stages" had been established only a short time before and were not yet adequately coordinated. As a result, passengers frequently experienced long delays at transfer points. The establishment of stagecoach lines was left to individual entrepreneurs or to companies of investors; unlike some states, which licensed early stage lines, North Carolina exercised no oversight at either the state or local level. Capt. Nathaniel Twining ran an early line in the eastern part of the state, although service varied in efficiency, comfort, and safety before competing lines forced improvements.

Whatever the quality of service, travel by stagecoach was difficult. Even the most comfortable vehicles were stifling in summer and freezing in winter. If the windows were left open, dust from the road stirred up by the horses and carriage wheels would cover everything inside. Passengers often rode from dawn to late evening and were likely to be roused at 4:00 a.m. to continue a journey. Roads were execrable, and if horses or carriage wheels became mired in mud, passengers had to get out and walk or literally put a shoulder to the wheel. Coaches were also delayed by breakdowns-broken axles were common. Fording streams was also routine, and if the water level was high, patrons could expect to get wet inside their carriage. Moreover, vehicles frequently overturned.

Another uncertainty was the type of accommodations provided at stage stops. Almost uniformly, visitors complained that the inns and taverns in North Carolina were filthy, served unpalatable food, provided rude service, and offered no privacy. According to some travelers, female passengers were forced to crowd into one room, men had to wash in a trough in the yard and to sleep two to a bed, and dinners of chicken swimming in black grease were served with lumps of soggy dough instead of bread.

A travelers' guide from the 1840s listed 18 stage routes in North Carolina with all their stops; 7 originated in Raleigh, radiating out in all directions. In the west, Col. Valentine Ripley of Hendersonville was part owner of a major stage line-Rutledge, Pool, and Ripley-that connected Greenville, Tenn., and Greenville, S.C., via Asheville, Hendersonville, and Flat Rock. Because the terrain was so rough in western North Carolina, travel by stage required changes of teams every eight to ten miles and often six horses instead of the usual four.

Despite their discomfort, stagecoach passengers generally did not complain and often developed a camaraderie with other riders. As stagecoaches were on the verge of extinction, travelers by railroad (which had doomed the stage lines) began to lament their passing and the loss of excitement and intimate contact with villages, countryside, and fellow passengers that stage travel had offered.

Randle B. Truitt, Trade and Travel around the Southern Appalachians (1935).

Were stagecoaches integrated in 1868? Could freedmen ride with whites on stagecoaches? Were they prevented from riding? Did they have their own coaches?

Any maps of stage coach lines

Any maps of stage coach lines around round top Mountain 1830s to later?

Thank you for visiting NCpedia. I recommend contacting the State Archives of North Carolina (https://archives.ncdcr.gov/) for information.

My family property near Hillsborough has one of the old stagecoach lines on it. Can you please help me find out more information about it? Thanks!

Thanks for visiting NCpedia. I am forwarding your request to our reference team.

would like to find a map of stagecoach roads in nc and the stops. does it exsist

These are not easy to find, are they? I'm having some difficulty, too. I did come across this, which you may find enjoyable:

How can I find out about

How can I find out about stage coach inns or houses in Wilkes/ Surry county nc? Thanks!

Thank you for visiting NCpedia and sharing your question.  I'm going to refer  you by email to reference librarians at the NC Government & Heritage Library.  A librarian will contact you shortly to assist you if you're still looking for this information.

Where there any stagecoach

Where there any stagecoach robberies from 1850 to 1875 in yadkin or surry counties?on the family farm there is a section of old center rd yadkin county nc that was used in 1800s by the stage lines from old family stories. You of hear of robberies out west. I was wondering if any happen here in our home state?
Thanks david smith