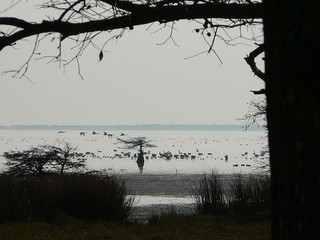 The Civil War battle at Swan's Quarter occurred on 3 Mar. 1863 during a Union expedition led by Capt. Colin Richardson. His command included Company G from the 1st North Carolina Infantry (U.S.). Accompanied by the gunboat North State, Richardson set out from New Bern aboard the steamer Escort on a foraging expedition. On 3 March, on a country road near Swan's Quarter, Richardson and his force of 250 artillery, cavalry, and infantry ran into an ambush consisting of about 80 unidentified Confederate troops. Despite their distinct advantage, the Federals were thrown into confusion and had to be rallied before they could contend with the smaller opposing force. Once the howitzers were brought to bear, the ambushers slowly began a fighting withdrawal from the outskirts of Lake Landing back to and through the hamlet of Swan's Quarter. Basing his decision on a rumor that 200 or more Confederates were on the road leading out of Swan's Quarter, Richardson abandoned his expedition and retreated to New Bern, passing through Swan's Quarter, Fairfield, Skeet, and Lake Landing on the way to his ships. Richardson reported 4 men dead and 15 wounded.