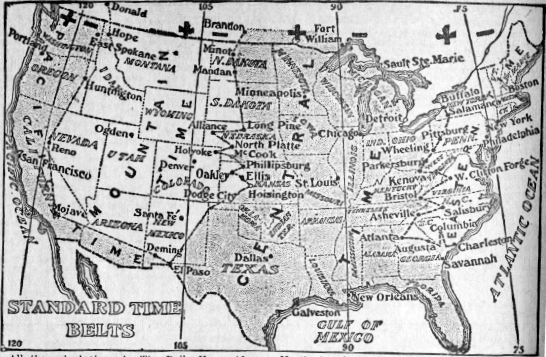 Time zones were determined locally until the coming of railroads. Schedules then became essential, particularly for trains traveling in an east-west direction. In the decade before 1880, the need for standardization became critical and the subject was widely discussed. The United States observed almost 100 conflicting local sun times until the fall of 1883, when a General Time Convention met in Chicago on 11 October and a Southern Time Convention convened in New York on 17 October. As a result, at noon on Sunday, 18 Nov. 1883, four times zones across the nation were established. Most of North Carolina fell into the Eastern Standard Time zone, but the western limit for that zone ran through Asheville at 82 W 33', thereby leaving a portion of western North Carolina in the Central Standard Time zone. This remained the case until 1946, when most of the municipalities in the western counties passed local ordinances changing to Eastern Standard Time. On 28 Sept. 1947 North Carolina adopted Eastern Standard Time statewide.