"Steam Power — Not Just for Railroads" 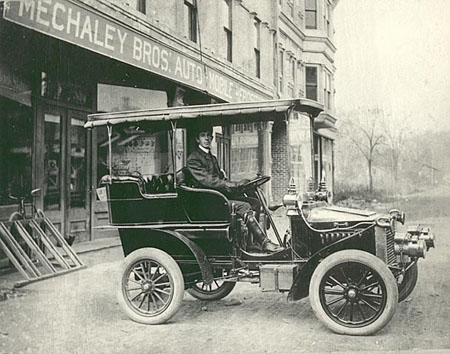 Alternative fuel sources are very popular today, as production has increased for hybrid cars that use more than one kind of power technology. Research continues into electric and hydrogen fuel cells. Some of the first cars did not run on gasoline, but relied on steam. Unlike most modern cars that start with the turn of a key, steam cars took several steps to start and up to about forty-five minutes to drive away!

Thomas H. White, founder of the White Sewing Machine Company of Cleveland, Ohio, developed early steam-powered cars. In 1900 his company began to build them. It chose a Stanhope design, based on a horse buggy with high seats and a closed back. The cars were two-seat convertibles, with a semiflash steam boiler mounted under the seat. Power came from a two-cylinder engine connected by chain to the rear axle. A large tiller (like on a small sailboat) turned the front wheels. The company built a total of 193 steam-powered automobiles in 1901.

Operating a steam car took several steps. These included checking the water level in the boiler, priming and igniting the fuel source (usually kerosene), and waiting until the pressure allowed the engine to run. Since this process could take more than a half hour, there was no running a quick errand into town!

White continued to use steam power until 1909, when it changed to gas-powered engines. The company’s cars took on more of an ordinary design for the period as well, losing the buggy look. White eventually quit making automobiles completely and began production of commercial vehicles, including trucks. The Volvo Corporation bought out White in 1981 and continued to produce trucks under the White name.

The North Carolina Transportation Museum in Spencer has a 1901 White Steam Stanhope on permanent display in its Bumper to Bumper automotive exhibit.

Larry K. Neal Jr. is the manager of visitor services at the North Carolina Transportation Museum in Spencer. To learn more about the museum and its offerings, access its Web site at www.nctrans.org.