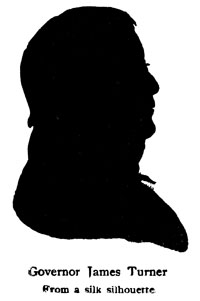 James Turner (1766-1824) was a friend and ally of United States Senator Nathaniel Macon. Turner was born on December 20, 1766, in present-day Warren (then Bute) County, the son of Thomas and Rebecca Turner. Little is known of his early youth or education, but during the late stages of the Revolution he saw service in North Carolina as a private in the army of General Nathanael Greene. Serving in the same company was an older Warren County resident, Nathaniel Macon, with whom Turner formed a lasting and formative friendship. By 1790 Turner had become a moderately successful planter, having acquired two Warren County plantations and some twenty slaves. Turner was married three times and widowed twice. His first wife was Mary Anderson of Warrenton, who died in 1802. His second wife, Anna Cochran, died in 1806. His third wife was Elizabeth Johnston, who survived him. The three marriages together produced six children, two sons and four daughters.

Entering upon a varied career in politics, Turner represented Warren County in the House of Commons from 1798 to 1800 and in the Senate in 1800-1801. As a member of the General Assembly, he was affiliated with the so-called “Warren junto,” an influential group of conservative Republicans led by Nathaniel Macon, his former comrade in arms. On November 29, 1802, the Republican dominated legislature elected John Baptista Ashe governor. Ashe, however, died less than a week later prior to taking office. In a second election, held December 4, Turner was selected in his place to his first term as governor. Reelected to office on two subsequent occasions, he served the constitutional maximum of three consecutive years.

Turner’s tenure came during a period of clear Republican ascendancy in the political life of the state, its erstwhile Federalist leaders having largely died, recanted, or retired. Moreover, fiscal conservatism and distrust of innovation were such prominent features of the political landscape that few accomplishments could reasonably be expected from his administration. Each of his three principal messages to the General Assembly spoke generally of the need for broad-based public education in the state, but specified no concrete steps through which such a goal could be achieved. Other areas of concern during his administration included the lingering border dispute with Georgia and the need for modest reform of the state’s judicial system. With respect to business and finance, it should be noted that it was during his governorship that the state’s first banks were chartered in New Bern and Wilmington.

In November 1805 Turner resigned the governorship to accept his recent election to the United States Senate. There he remained for the next eleven years, generally associating himself with the conservative Republican politics of his mentor, Nathaniel Macon. Turner, however, achieved no distinction or prominence during his years in the Senate, his energies often depleted by poor health. Prevented by illness from returning to Washington in the fall of 1816, Turner submitted his resignation. Largely withdrawing from public life, Turner passed his remaining years quietly at his principal Warren County plantation, “Bloomsbury.” There he died on January 15, 1824, and was interred on the grounds.