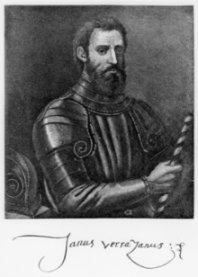 Florentine Giovanni da Verrazano in 1523-24 explored the southern and central coast of what became North Carolina while carrying out a reconnaissance of North America for the king of France. He made landfall around 21 Mar. 1524 at a spot he named "Selva di Lauri" (Forest of Laurels), probably in the vicinity of Cape Fear, and sailed south. In this direction he discovered "Campo di Cedri" (Field of Cedars), but no harbor. Eager "not to meet with the Spaniards," he turned back to the north. On the Feast of the Annunciation (25 Mar. 1524), he reached the area between present-day Cape Lookout and Cape Hatteras. Verrazano's opinion that the land of "Annunciata," as he called this part of the Outer Banks, was an isthmus separating the Atlantic Ocean from an arm of the Pacific influenced the mapping and exploration of North America for nearly a century.

Birth of a Colony, UNC-TV: http://www.unctv.org/content/birthofacolony