Waterwheels harnessed the volume, force, and gravity of various 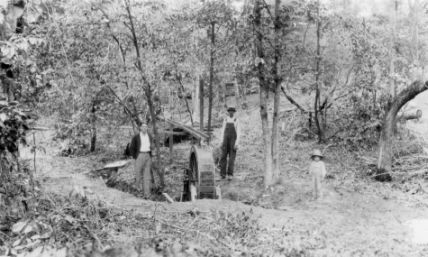 bodies of water in North Carolina to provide the leading sourceof natural, inanimate power before the advent of the steam engine and industrialization. The effectiveness of waterwheels in supplying power to grain, flour, and oil mills lay in their engineering simplicity and adaptability to the task at hand. Three different types of vertical wheels-overshot, undershot, and breastshot-utilized various properties of flowing water, which meant that virtually any moving body of water could power awheel and, consequently, machinery. Although a single waterwheel actually only powered one turning shaft, gears and cams magnified those revolutions into power for numerous purposes. While waterwheels are usually associated with flour and grain milling, North Carolina had water-powered mills that produced woolen cloth, bore rifle barrels, and pounded rags into paper.

When Oliver Evans developed and patented the first wholly automated water-powered flour mill, Moravians purchased one of the first (and only) licenses for the system. The engineering concepts involved in such an operation were basically general knowledge and no one wanted to pay for them. This helps explain why waterwheels continued to be a popular source of power in North Carolina (especially in undeveloped, rural areas) well into the twentieth century and why few records other than licenses to operate them exist to document their history.