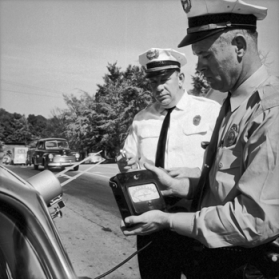 The Whammy, the bane of lead-footed North Carolina drivers during the 1950s and 1960s, was officially a "Speed Watch," the first mechanical device used by North Carolina authorities to detect vehicle speeds. Made by the same company that later developed the "Breathalyzer," the Whammy easily obviated the old subjective estimation methods used by law enforcement personnel. Drivers charged with violations upon evidence from this high-precision device had little chance of escaping conviction and the legal costs and higher insurance rates that ensued.

A law officer would set up a Whammy operation by secluding his or her vehicle near the road and rigging the equipment, which involved placing two air-filled rubber hoses perpendicularly across the roadway, exactly 132 feet apart, then connecting both hoses to a clocking mechanism mounted inside the car. It calculated speed by factoring the known distance traveled and the time needed to cover that distance. Pressure from a vehicle tire on the first hose started a timer, and pressure on the other stopped it; a toggle switch allowed the officer to clock vehicles from both directions. If the timer indicated a speeding vehicle had passed over the apparatus, the officer had to disconnect both hoses, toss them aside, and pursue the offender. Whammy victims may find a little solace in knowing that law officers disliked the contraption, which was almost impossible to assemble and disassemble without soiling their uniforms. As an old patrol hand put it, "the Whammy was the filthiest, aggravatin'est thing to put down and to take up!"

Whammys were used consistently by North Carolina Highway Patrol officers until about 1970, when they were replaced by more technologically advanced devices. The nickname "Whammy," which seems to have been unique to North Carolina, almost certainly came from Al Capp's Li'l Abner comic strip character Evil Eye Fleegle, who could inflict harm or destruction with the "whammy," a baleful stare from his distended eyeball.