The Wilmington, Brunswick, and Southern Railroad (WB&S), originally known as the Town Creek Railroad and Lumber Company, was chartered in 1907 by local interests to provide freight and passenger service between a connection with the Atlantic Coast Line Railroad and the Seaboard Air Line Railway at Navassa, west of the Cape Fear River bridge, the heart of Brunswick County, and Southport. A 30-mile line was completed in November 1911 by a rather indirect route through Town Creek and Bolivia. According to local legend, the abbreviation WB&S inspired the nickname "Willing, But Slow" when a small locomotive, despite valiant puffing, was unable to start a trainload of World War I soldiers on holiday until many of them got off and gave the train a push. Unlike other Wilmington railroads, the WB&S remained an independent operation throughout its history. Service was discontinued in 1941 and the road abandoned in 1943. 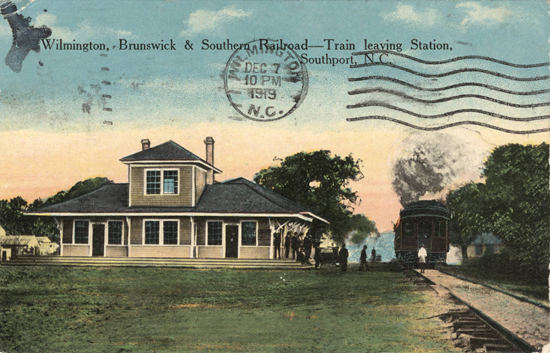 Charles Kernan, Rails to Weeds: Searching Out the Ghost Railroads around Wilmington (1988).