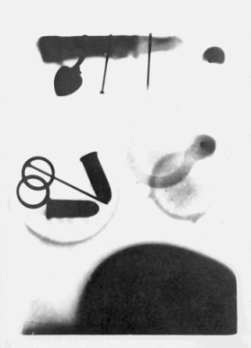 On 8 Nov. 1895 Professor Wilhelm Roentgen of the University of Würzburg, Germany, accidentally discovered that electricity, when passed through a glass vacuum tube known as a Crookes' tube, emanates invisible rays that pass completely through the human body, producing photographs of bones and localizing foreign bodies. As soon as an Associated Press account of the new invisible "X" rays was published in the United States on 6 Jan. 1896, American scientists attempted to duplicate Roentgen's experiments.

Henry Louis Smith, professor of natural philosophy at Davidson College, immediately realized that the college laboratory contained the same equipment Roentgen had used to produce the new mystery rays. On 22 Feb. 1896 Smith fired a bullet into the hand of a cadaver (obtained from nearby North Carolina Medical College) and used X-rays to make a photograph clearly showing the bullet's location in the hand. On 27 February an account of his work and an artist's rendition of the photograph appeared in the Charlotte Observer. The article caused a sensation in southern medical circles. Although similar experiments were being conducted at Yale and Columbia Universities, it is believed that Smith's "radiograph" locating a foreign object in the human body was the first to be made in the South and one of the first in the United States.

Smith, later president of Davidson College, could also claim credit for the earliest use of X-rays to locate a foreign body in a patient's trachea, enabling surgeons to perform a lifesaving procedure. In the latter part of 1897, a young Cabarrus County girl named Ellen Harris swallowed a small brass sewing thimble. As her condition worsened, examining physicians were unable to determine if the thimble remained in her throat or if some other illness threatened her. At the request of her parents, Smith traveled 25 miles to the Rocky River section of Cabarrus, transporting his batteries and equipment in a wagon. He determined the location of the thimble and marked its location with ink. Ellen was then taken to the Charlotte Surgical Institute for surgery. In order to convince the skeptical surgical team to operate on the child's throat, however, Smith had to haul his equipment to Charlotte and demonstrate the object's location for them. With the aid of the images, the surgeon, C. A. Misenheimer, was able to remove the thimble. News of the lifesaving procedure was widely publicized in area newspapers; afterward Smith was called on several times to locate foreign bodies for removal through surgery.

An interesting and controversial side note to Smith's successful use of X-rays concerns three undergraduate students at Davidson during that period. Having read accounts of Roentgen's experiments in the popular press, juniors Osmond Barringer, Eben Hardie, and Pender Porter decided to make a photograph using the Roentgen procedure. On Sunday evening, 12 Jan. 1896, they secretly used equipment in the Davidson laboratory to expose a plateful of small objects, including the finger of a cadaver, to rays from a Crookes' tube for three hours. The resulting photograph clearly showed how the new rays passed through items of various densities. The three students remained silent about the photograph, fearing expulsion for breaking into the laboratory and dissecting rooms. Years later they broke their silence to claim credit for their early accomplishment, which is preserved in the Davidson library and is now recognized as one of the first X-ray photographs made in the United States. Smith always indignantly denied the students' claim, however, contending that their effort followed his earlier successes and was based on his classroom demonstrations.