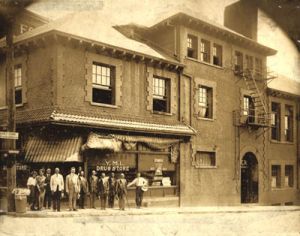 The Young Men's Institute in Asheville, backed by businessman and philanthropist George W. Vanderbilt, opened in 1893 as a community center for black construction workers at his Biltmore House and Asheville's increasingly segregated African American citizens. By 1906 a black-led supervisory committee had assumed ownership of the center's building. The large brick structure provided blacks with space for a wide variety of business, civic, educational, religious, and social activities until 1977, when it closed. The Young Men's Institute building is listed on the National Register of Historic Places.