Part iv: Segregation and the struggle for equality 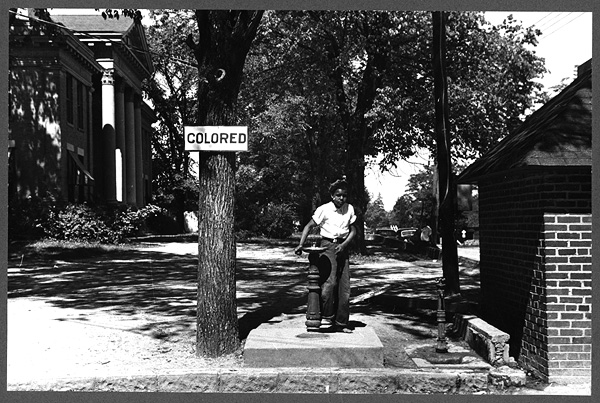 During the Jim Crow era, racial segregation combined with disfranchisement maintained the second-class citizenship of black North Carolinians. Segregation defined the physical place of blacks in society, as well as their position in the accepted social order. Blocked from political participation, many African American leaders of the middle class—comprised of teachers, clergymen, and businessmen—endorsed patience and accommodation. While they attempted to cultivate a  spirit of cooperation with whites, other blacks simply worked to overcome continuing gross inequities, building successful businesses and educational institutions despite the lack of white support. Durham became a center for the black professional class in the early twentieth century. The North Carolina Mutual Life Insurance Company, headquartered there under the direction of John H. Merrick and Aaron M. Moore, was a prime example of African American achievement during the era. Mutual Life was the first black-owned insurance company in the state and the largest and most successful in the nation.

Building on the traditional role of women as the moral protectors of society, female African Americans proved to be particularly adept in this adverse political environment. With more than 30 years of involvement in temperance societies, Republican aid groups, and churches, black women in North Carolina became critical spokespersons for their communities and managed to turn the Progressive crusade for public cleanliness into a means to improve the living conditions of many African Americans. Regardless of these efforts, however, most white North Carolinians sought only to refine the Jim Crow system and retain systematic segregation.

Early in the twentieth century, organized resistance to segregation began to take form and gradually intensify. In 1932 black ministers in Raleigh refused to participate in the dedication of the new War Memorial Auditorium because African Americans would be confined to a small section of the balcony. In 1938 Greensboro students boycotted local theaters that supported the censure of ‘‘the appearance of colored people in scenes with whites on an equal basis.’’

Opposition to segregation began to grow more rapidly during and after World War II. In 1942 Montford Point Camp was established at Camp Lejune near Jacksonville to train the first African American members of the U.S. Marine Corps. Although Montford Point itself was separated from the rest of the camp, the training of black marines and their integration into the corps was a defining moment in ending federally sanctioned segregation. As they returned from service abroad in the armed forces, black men and women increasingly challenged their lack of complete freedom in the postwar society. Organizations such as the North Carolina chapter of the National Association for the Advancement of Colored People, which held its first state convention in 1943, became effective instruments for leading opposition to segregation of the races. In 1946 hundreds of students marched in downtown Lumberton to protest inadequate educational opportunities. In 1949 students from the North Carolina College for Negroes (modern-day North Carolina Central University) picketed the State Capitol to demand better law school facilities at the Durham institution. Limited desegregation of higher education occurred as the University of North Carolina School of Medicine at Chapel Hill accepted Edward O. Diggs as a student; four other black men entered the law school in 1951. By 1957 seven black activists led by Douglas E. Moore, a Methodist minister, sought service in the white section of a local ice cream parlor in Durham. Although these activists were arrested and convicted of trespassing, similar events elsewhere presaged more positive results as pressure for change increased and resistance gradually diminished. 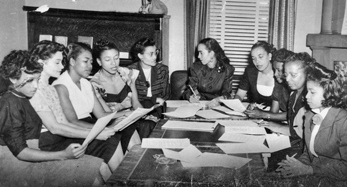 Other, more reluctant North Carolina communities followed these examples, but it took more than three decades of court-ordered desegregation to deinstitutionalize the racial policies of the Jim Crow era. In the case of Blue v. Durham Board of Education (1951), a North Carolina court found that in the matter of unequal public school facilities, black children had been discriminated against because of their race. As a result of that finding, school officials conceded the existence of disparities between facilities for white and black children and the need for more equitable resources.

The 1954 ruling by the U.S. Supreme Court in Brown v. Board of Education of Topeka, Kansas that segregation in public schools solely on the basis of race was unconstitutional caused even greater consternation within North Carolina’s white political community. In response, Governor William B. Umstead established a Special Advisory Committee on Education to ‘‘keep the law, keep the peace, and keep the schools.’’ In December 1954 the committee recommended ‘‘that North Carolina try to find means of meeting the requirements of the Supreme Court’s decision within our present school system before consideration is given to abandoning or materially altering it.’’ It also proposed that the authority to make pupil assignments to individual schools be transferred from the State Board of Education to the appropriate local boards of education. The General Assembly adopted the committee’s proposals in March 1955.

The following month the legislators created a seven member North Carolina Advisory Committee on Education. New governor Luther H. Hodges appointed its members and named Thomas J. Pearsall as chair. The Pearsall Committee, as it became known, put forward a plan in which it recommended that educational expense grants be allocated from state or local public funds for the private schooling of any child who was assigned to an integrated school against the wishes of his or her parent or guardian. Moreover, local communities would be permitted—by majority vote—to suspend the operation of public schools if conditions became intolerable because of forced integration. The General Assembly adopted the plan in July 1956, and white voters overwhelmingly ratified the amendment in September. Although it purported to give local officials the authority to make decisions regarding their own school systems, the Pearsall Plan actually served to discourage or at least delay integration.

In the late summer of 1957, a dozen black students were enrolled in the previously all-white public schools of Charlotte, Greensboro, and Winston-Salem. From this small beginning, integration continued at amodest pace; in 1961, just over 200 black children attended classes with their white counterparts in 11 school districts. With the passage of the U.S. Civil Rights Act of 1964—providing that federal funds be withheld from school districts where racial discrimination continued to be practiced—North Carolina began more rigorous efforts to integrate its public school system.

Many people believed that the landmark decision in Brown applied to segregation in all accommodations, not just the public schools. In later cases, the U.S. Supreme Court upheld this view, but actual change was agonizingly slow in North Carolina, forced at almost every juncture by black activists. In one celebrated episode, four African American students from the North Carolina Agricultural and Technical College staged a sit-in at the lunch counter at Woolworth’s in Greensboro in February 1960. They were soon joined by other blacks, and by the end of the week more than 300 students were participating in the protest, which had extended to other stores that served food. The movement spread to cities across the state, and after prolonged negotiations, all the stores involved agreed to make their food service available without regard to race. On 25 July 1960, the first African American was served at Woolworth’s lunch counter in Greensboro.

Similar activities by young African Americans and their supporters integrated the state’s theaters, hotels, motels, and restaurants in 1963. In the same year the General Assembly voted to desegregate the National Guard. With the federal Civil Rights Act of 1964 prohibiting discrimination in most public facilities, soon even municipal cemeteries were integrated, as were the athletic teams of many previously all-white colleges and universities. In 1966 the U.S. Supreme Court declared North Carolina’s Pearsall Plan unconstitutional. Although none of the powers granted under the plan were ever invoked, supporters argued that it had served its purpose as a ‘‘safety valve.’’ No schools were closed in North Carolina to avoid integration. Such cases as Swann v. Charlotte-Mecklenburg Board of Education (1971) gave federal judges and liberal educators a new tool—busing—not only to desegregate but to fully integrate the public schools.