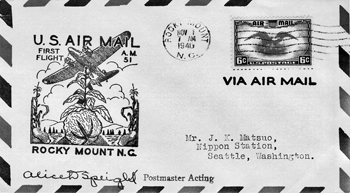 Airmail service developed after the Wright brothers' first flight at Kill Devil Hill in 1903, as aviators began to anticipate airplanes' practical uses, such as carrying mail. The first official airmail was flown from North Carolina on 2 Jan. 1911. Later that year, a group of Wilmington businessmen headed by Frank Herbst made plans to bring an airplane to the city on New Year's Day, 1912. Morris Caldwell, president of the Wilmington Driving Association, assisted the group. The Wright Exhibition Company also agreed to send an aircraft and a pilot, and the U.S. postmaster general granted permission for the plane to carry mail. Nearly 1,700 people gathered to watch the plane take off. The 1,600 pieces of mail carried a special "Aeroplane Mail Service" postmark. The pilot flew three miles to Winter Park Gardens, where he dropped the mail pouch from about 500 feet to Wilmington post office employee E. L. Lee. The mail then moved through normal delivery channels.

Full-time airmail service did not begin in North Carolina until May 1928, when contract airmail route 19 was given to Pitcairn Aviation, Inc. The service carried mail from Boston and New York City to Atlanta, Miami, and New Orleans, with stops in New Bern, Wilmington, Raleigh-Durham, Charlotte, Greensboro-High Point, and Winston-Salem. The inauguration of jet airliners in the 1960s provided even faster delivery. By the end of the century, almost all nonlocal mail went by plane, well overshadowing the railroad and highway postal system.

Airmail required special stamps to pay the additional postage. Of the more than 130 different U.S. airmail stamps, 2 saw their first day of issue in North Carolina. On 17 Dec. 1948 a six-cent stamp was issued to honor the 46th anniversary of the Wright brothers' flight. Its first-day ceremonies were held at Kitty Hawk, where 378,585 first-day covers were processed. Again on 15 May 1971, a nine-cent airmail stamp bearing the image of a Delta Wing airplane had its first-day ceremonies at Kitty Hawk; 379,442 first-day covers were processed.