Part 1: Introduction; Part 2: First North Carolina Conflicts and the Establishment of a Provincial Government; Part 3: North Carolina's Role in the Continental Congresses; Part 4: Conflict with the Cherokees and British Invasion of the South; Part 5: Gen. Nathanael Greene and the Battle of Guilford Courthouse; Part 6: A Troubled Aftermath 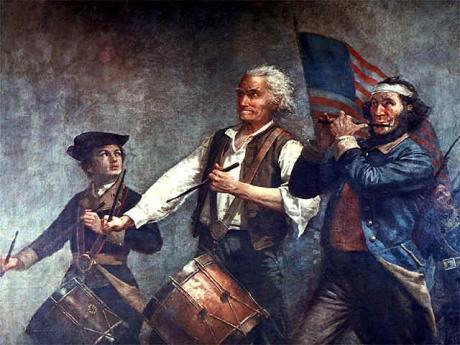 Although the formal war with the British had ended, the new state of North Carolina faced many problems. Social and political chaos reigned where a new, well-organized government had yet to form. Bands of marauders, both Whigs and Tories, wreaked havoc, burning houses, murdering, and robbing indiscriminately. For more than a year, various groups of Loyalists continued the so-called Tory War, fighting violently in numerous neighborhood encounters. Under the inspiration of Loyalist leader David Fanning, who shortly before the end of the war had reorganized the Loyal militia, these men ranged across central North Carolina engaging in a program of violence and destruction. Several truces were arranged, but neither side fully supported them. It was only after Fanning married a local woman in April 1782 and left the state that peace prevailed.

Through the rest of the 1780s, North Carolina remained a troubled aggregation of factions that had yet to achieve the unity and communal identity that would eventually characterize the state. The road to recovery was long and arduous. Economic conditions were extremely unstable, and commerce was practically nonexistent. Many of the state's businesses and important institutions, such as schools and newspapers, were in ruins. The Church of England and several other Protestant denominations struggled to assert the same moral influence as before. Political bitterness and distrust between social classes were rampant. All of these issues needed to be resolved before North Carolina would fully and successfully participate in the emerging national government.

A people's history of the American Revolution. Photo courtesy of Libcom. Available from http://libcom.org/history/peoples-history-american-revolution. (Accessed May 10, 2012).