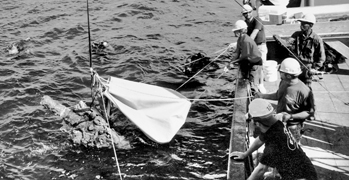 Underwater archaeology was first conducted in North Carolina in the early 1960s, when U.S. Navy divers, working in cooperation with the North Carolina Department of Cultural Resources, recovered several thousand artifacts from sunken Civil War blockade-runners in the Wilmington vicinity. In 1963 the state established a preservation laboratory at the Fort Fisher State Historic Site to treat those artifacts, and in 1967 the General Assembly passed a law to protect submerged cultural resources in the state. That statute claimed North Carolina's ownership of all cultural material unclaimed in state waters for more than ten years. Further, the law authorized the Department of Cultural Resources to establish a professional staff and regulations for managing those submerged resources, and to develop a system for permitting qualified individuals, groups, and institutions to conduct investigations and recovery projects of underwater archaeological sites.

The North Carolina Underwater Archaeology Unit maintains extensive files on over 4,000 historically documented shipwrecks, as well as a wide variety of water-related subjects such as bridge and ferry crossings, historic ports, plantation landings, riverine and coastal trade, harbor development, and improvements to navigation. Historical research can be used to define a search area where a specific shipwreck should be located or to identify a site that has been located by other means. Over the past three decades, researchers have documented more than 700 underwater archaeological sites in North Carolina that include prehistoric dugout canoes, colonial sailing vessels, beached shipwreck remains, dozens of Civil War shipwrecks, and nineteenth- and twentieth-century steamboats.

Underwater archaeologists use a variety of means to locate and document shipwrecks and other submerged sites. Occasionally, sites can be visually observed in shallow water and are reported by fishermen, boaters, or recreational scuba divers. To locate shipwrecks in deeper water, archaeologists rely on remote sensing equipment such as magnetometers and side-scan sonar. The remote sensing equipment is operated from a research vessel that systematically searches the survey area. Ideally, an electronic positioning system is used to maintain and record the vessel's position during the survey.

The position of all artifacts must be carefully recorded, and, once recovered, the artifacts should be stored in water until they reach the preservation laboratory. A variety of methods are employed to stabilize artifacts recovered from an underwater environment, depending on the composition of the material and whether it came from fresh or salt water. Waterlogged organic materials, such as wood, are normally preserved by replacing the water with a bulking agent such as polyethylene glycol (PEG) or sugar. Ferrous metals are ordinarily stabilized through electrolytic reduction. For large objects, like cannons, this process can take several years to complete.

George F. Bass, Ships and Shipwrecks of the Americas: A History Based on Underwater Archaeology (1988).

Mark A. Mathis and Jeffrey J. Crow, eds., The Prehistory of North Carolina: An Archaeological Symposium (1983).

Archaeologists on a recovery ship secure a 763-pound cannon brought to the surface by divers from a wreck believed to be Blackbeard's flagship, the Queen Anne's Revenge, which sank in Beaufort Harbor in 1718. The site, discovered in 1996, yielded a wide variety of artifacts as well as parts of the ship itself. Courtesy of North Carolina Office of Archives and History, Raleigh. (accessed October 8, 2012).

Need info around Rich's Inlet and Figure Eight island, maps or anything appreciated
Thank you in advance!!!!!!

Thank you for visiting NCpedia and for taking the time to share your question.

Unfortunately, NCpedia does not have any additional substantive information on Rich’s Inlet and Figure Eight Island.  Is there a specific aspect of these locations or topic that you are interested in?   If so, I can try to help you locate information that would hopefully be useful.

Please feel free to reply to this post.  I have also replied to the email address you included with your post.
Best wishes,
Kelly Agan, NC Government & Heritage Library

Looking for info on JA Holmes

Looking for info on JA Holmes, Hamilton McMillan, the McLean and McFayden Mounds, also the mounds in Robeson, Cumberland, Hoke and Sampson counties. I have done an immense amount of research on Carolina Indians and their sacred mound systems. Thanks in advance.