After World War II, professional archaeologists began to show increased interest in North Carolina's rich cultural remains, beginning with the region along the Atlantic Coast. Between 1947 and 1953 the National Park Service sponsored excavations on Roanoke Island to expose and reconstruct the remains of Fort Raleigh, the first English settlement in North Carolina and the site of the "Lost Colony." In the decades that followed, more than 27,000 recorded archaeological sites across the state were discovered and researched. These sites can be categorized both by geographic region (coastal plain, piedmont, and mountains) and by cultural eras, which include the Paleo-Indian period (before 8000 B.C.); the Archaic period (8000-1000 B.C.); the Woodland period (1000 B.C.-1600 A.D.); the Mississippian period (1000-1400 A.D., piedmont and mountains only); and the Historic, or Contact, period (after 1540 A.D.).

Archaeological Research in the Coastal Plain

In 1883 geologist J. A. Holmes was the first to report on the archaeological remains of the North Carolina coastal plain. In 1955 a program to develop the Cape Hatteras National Seashore Park was undertaken and an archaeological survey of the northeastern coastal region was done under the direction of William Haag. Since then numerous excavations have been made, piecing together a cultural history of the southern and northern coastal areas.

During the Paleo-Indian period, most of the North Carolina coast was situated several miles east of its present location. As a consequence, many Paleo-Indian sites lie submerged, and those that are found represent what was then the inland coastal plain region. There are few recorded sites, and settlement patterns of the Paleo-Indian period are still unknown. It is hypothesized that some of the sites were located on major streams or probably served as base camps, but this does not represent a settlement model. Fifteen fluted Paleo-Indian spear points have been found in the coastal plain, one-third of them in Camden and Pasquotank Counties. The others were scattered, isolated finds that reveal little in terms of a distributional pattern.

Numerous Archaic period Indian sites have been discovered on the North Carolina coast and coastal plain. Many spear point styles have been identified from this period, including the Palmer corner-notched and Kirk corner-notched points, Stanly stemmed points, and Guilford Lanceolate points. These points represent different times within the Archaic period. There were also different types of campsites occupied by bands of hunters and gatherers reacting to specific food-source and environmental changes. The Late Archaic period seems to reflect a shift in settlement location to the mouths of major rivers. Camps were more sedentary, and the rudiments of pottery making and horticulture began. Large groups began to settle and live in the same spot through most of the year.

The northern coastal plain was occupied by Algonquian- and Iroquoian-speaking groups when the first English colonists arrived. The southern portion, extending from just south of the Neuse River basin to the modern South Carolina state line, was inhabited by Siouan-speaking tribes. The central part, today comprised primarily of Onslow and Carteret Counties, reflected an area of cultural overlap and transition between the northern and southern coastal plain. Most archaeologists usually define the onset of the Woodland period by the appearance of pottery making and use the various styles of pottery to chronologically order artifact assemblages and to study relationships among Woodland cultures. The use of cultivated plants and advancing agricultural practices also define the time periods within this era. With growing populations came more conflicts, and evidence of stockades to repel attackers has been found. 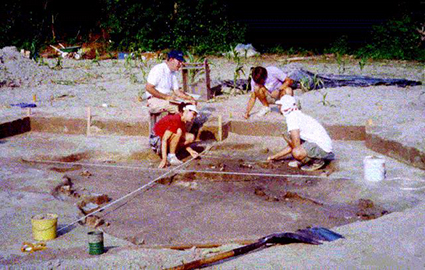 The first permanent European settlers on the coast were English. Settlements grew out of port towns such as Edenton, Bath, New Bern, Beaufort, Brunswick, and Wilmington. Most of these white inhabitants came from Virginia. The Albemarle Sound region was settled around 1650, and later the Cape Fear region.

There is abundant evidence of North Carolina's maritime heritage buried in mud and sediment throughout the waterways and ocean. Indian wooden dugout canoes, ships, paddlewheel steamboats, fishing boats, and more indicate the activities of these past people up to the present.

Current archaeological sites on the coast include those on Hatteras Island, the Amity site, the Contentnea Creek drainage, Neoheroka Fort, the Eden House site, and Brunswick Town (a State Historic Site). These and other maritime archaeological sites are monitored by the Office of State Archaeology (OSA), Division of Historical Resources.