Architecture in North Carolina: an Overview

The architecture of North Carolina is as varied as the people who live here, and is influenced by the industries, geography, and climate that shaped the State's social and economic growth. Likewise, architecture has had its own influencing effect. From the time that structures were first erected on the land now called North Carolina, these buildings have played a role in how people interact within the home and the ways in which agricultural products are produced, factories output manufactured goods, and students are educated. 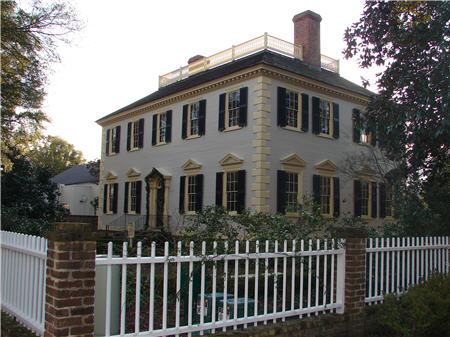 Early structures built in North Carolina combined available resources with simple, functional building techniques brought from Europe. Often lacking affluence and skilled artisans to create grand residences, most early settlers constructed homes to provide basic shelter rather than to establish permanence or demonstrate wealth or power. The landscape and climate of North Carolina impacted early construction, as well. Large forests provided a seemingly endless supply of timber – unlike the English farmlands with which many settlers were familiar – and early immigrants took advantage of this abundance by building most structures, including their homes, with wood. The hot, humid climate also influenced different building methods than those of English tradition. Among them, large porches, separate kitchens, and open breezeways were built to help keep occupants cool. These building techniques persisted in the state through the nineteenth century.  (Architects & Builders in North Carolina, p. 9-10)

Many of North Carolina’s earliest adopters of European-influenced architectural styles were wealthy planters and businessmen. While some employed building professionals, often the planter himself drew up the design for his house and surrounding buildings. Practical builders’ guides were popular in the late 1700s and early 1800s; North Carolinians purchased them to plan and construct their dwellings. Some of the wealthiest men in the state also kept a collection of pattern books, which were books of architectural designs from architects in Europe that could be copied, and architectural treatises in their personal libraries from which to draw inspiration. (Architects & Builders in North Carolina, p. 61)

Yet, few of the houses built by even the wealthiest North Carolinians at this time were overly decorative. Visitors to the colony, and later state, remarked on the “widespread satisfaction with unpretentious building.” (Architects & Builders in North Carolina, p. 56.) Public buildings such as courthouses reflected the popular unadorned style in the colonies that was a symbolic rejection of the overly ornate architecture of the King in England. Two of the earliest styles that appear in North Carolina architecture are Georgian and Federal. Georgian, austere and symmetrical, is typically found in buildings built between 1750 and the early 1800s; the Federal style, balanced and classical in nature, is often seen in buildings built between 1780 and 1830. Indeed, many structures built in the state combined elements of both styles. The John Wright Stanly house, built between 1779 and 1783, is an example of a Georgian style building, and Mulberry Hill, built around 1810, is an example of Federal style. Both houses are located in New Bern. 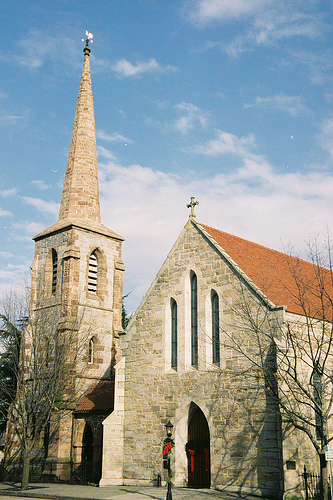 The advent of the railroad made building materials easier to mass-produce and distribute. At the same time, the architectural profession was beginning to define itself, and it is in this era that individual architects began to be associated with the buildings they constructed. In North Carolina, as in the rest of the nation, Greek Revival, Gothic Revival, and Italianate styles were embraced and used in both public and private building to promote the power and permanence of the new nation and its citizens. Two standout examples from this time period are both located in Raleigh: Christ Episcopal Church (designed by Richard Upjohn, the founder of the American Institute of Architects) and the North Carolina State Capitol (designed by Ithiel Town and Alexander Jackson Davis). (Encyclopedia of North Carolina, p. 62)

North Carolina plantations were mostly concentrated in the eastern part of the state, where the soil supported the large-scale growth of cash crops such as tobacco. In addition to the elegant main houses, plantations also included houses built for the slaves that worked the land. According to architectural historian Catherine Bishir:

Eighteenth- and early nineteenth-century accounts indicate that on most farms both owner and slave occupied small frame or log houses. In the mid-nineteenth century, while the scale of the planter’s own houses increased and a few especially progressive planters erected more substantial dwellings for slaves, most slave houses continued to be small, crude buildings. (Guide to the historic architecture of eastern North Carolina, p. 24)

The simple structures that slaves dwelled in dotted the rural landscape of North Carolina even after the Civil War as sharecroppers and poor farmers continued to make them their home.

Although the Civil War and the following tumult of Reconstruction put a halt to major construction, the Industrial Revolution that followed provided a tremendous boost to building. The Industrial Revolution introduced mass production, making construction materials available at much lower costs than previously. And with cheaper materials came a shift in the design of farm and factory that embodied both form and function. Many textiles mills, for example, drew from the Italianate style, achieving an aesthetically pleasing exterior, while also maintaining practicality in purpose and function inside the building. (Encyclopedia of North Carolina, p. 62)

Following these styles came the richly ornamental Second-Empire and Queen Anne styles, which remained popular throughout the Victorian era.These appear prominently in residential architecture in the West, although a notable exception is located in Raleigh – the Governor’s Mansion, lavishly Queen Anne. Further West in the mountain region of the state, a tourist boom led to the construction of luxurious hotels and private homes. The most well-known example of late-19th Century North Carolina architecture is the Biltmore house, near Asheville. This château-style mansion was designed by Richard Morris Hunt and home to industrialist George Vanderbilt. Frederick Law Olmstead, one of America’s most notable landscape architects, designed the estate’s elaborate grounds.

The early 20th Century saw unprecedented growth in North Carolina towns as people increasingly left farms for more industrialized work. According to Catherine Bishir and Michael Southern, “Towns doubled or tripled in size, and nearly every one rebuilt its main street with sturdy brick buildings.” (Guide to the historic architecture of Piedmont North Carolina, p. 43.) As industrialization continued to rise, new technologies were changing how buildings were built. Commercially produced timber and steel enabled buildings to be constructed more cheaply and quickly than ever before.

Industrialization and a greater emphasis on city living meant downtowns needed to both house and inspire the recently rural working classes. It is at this time that government buildings, such courthouses, post offices, and other public spaces, began to be built large and ornate, both inside and out. The first skyscrapers were erected during this period; the first in North Carolina were the Independence Building in Charlotte (1909, J. A. Jones) and the Masonic Temple building in Raleigh (1907-1909, Charles McMillen). 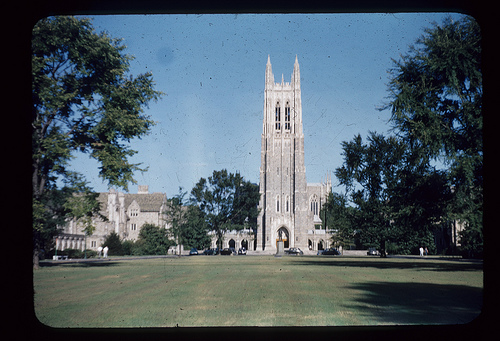 With a concentration of labor now living in downtown areas, residential suburbs began to spring up to which affluent families could escape the noise, grime, and density of the city proper. Built along the streetcar lines that extended outside the city limits, it was in these neighborhoods where most of the rising architects of the time designed homes. Charlotte was the first city in North Carolina to have "streetcar suburbs," with the Myers Park neighborhood (designed by John Nolen) being the most well known. Streetcar suburbs in Greensboro, Winston-Salem, Durham, Raleigh, and Wilmington soon followed.

Many of the social and political movements of the early 20th Century influenced the types of buildings that were being built in the state, as well. The Progressive Era pushed for education for all children, which led to a boom in school construction. Advancements in higher education led larger state universities to expand their facilities, and the opening of smaller teacher colleges and vocational schools to staff the increasing number of primary and secondary schools and hospitals being erected. Some of the state’s most well-known campus architecture was built during this period, reflecting the variety of styles popular in the pre-World War Two period. Duke Chapel, designed by Julian Abele and built between 1930 and 1932, is an example of Gothic architecture. The Louis Round Wilson Library (designed by Arthur Cleveland Nash) and the South Building portico, both built on UN.C.-Chapel Hill’s campus in the 1920s, are examples of the Beaux Arts neoclassicism style popular at the time. Driven by reform and a belief in science and technology, the Progressive Era also encouraged public infrastructure development in the areas of health, including the building of hospitals, sanatoriums, and children’s homes. The wealth was not distributed equally, however, and segregation and Jim Crow laws were reflected in the quality of the separate facilities built for blacks and whites.

Assembly line technology and increased emphasis on factory-made products soon lead to pre-fabricated houses, which began to appear in mail-order catalogs at this same time. A consumer could select the style of house they wanted, order it from the catalog and it would be delivered and set up on the lot of their choosing. The bungalow, a style commonly identified by low, horizontal massing, sloping roofs, eaves, front gables, and "cozy" interiors, was popular in North Carolina. Aladdin and Sears and Roebuck were the two best-known companies selling pre-fabricated homes, and several examples from the early days of factory-built residences in North Carolina still stand. 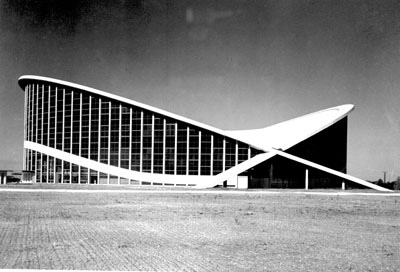 Beginning in 1948, with the establishment of North Carolina State University’s School of Design (now College of Design), the North Carolina landscape greatly benefitted from the influx of progressive architect-educators. The school’s first dean, Henry Kamphoefner, actively supported the faculty's innovative design contributions, including Dorton Arena in Raleigh, designed by Matthew Nowicki in 1951. In addition to Nowicki, Kamphoefner’s faculty included George Matsumoto, Lewis Mumford, James Fitzgibbon, Terry Waugh, and many other regional and national leaders of the Modern architecture movement. The faculty at the School of Architecture designed the majority of the Modernist residential homes in the Raleigh and Chapel Hill area during this period. G. Milton Small’s Office Building on Brooks Avenue in Raleigh, built in 1966, is a prime example of Modernist architecture in North Carolina.

While professional architects worked in the Modernist aesthetic in the 1950s and 1960s, the general public was moving away from architect-designed homes and towards more conservative, all-purpose residential designs. Colonial Revival – a style based loosely on the simple symmetry of the Georgian and Federal periods –was the most popular choice for North Carolina suburban home builders and buyers. Houses were increasingly built by “design-build contractors who drew on published sources and their own experience, and house plans grew more standardized.” (Guide to the historic architecture of Piedmont North Carolina, p.79) The country's dependence on the automobile increased during this time period as well, and architecture and landscaping, especially in the suburbs, began to reflect this with street-facing main entrances, driveways, and attached garages and carports. In North Carolina, the suburbs grew at a greater rate than cities they surrounded, and this move away from centralized downtowns continued to characterize the built landscape of the 1970s and later.