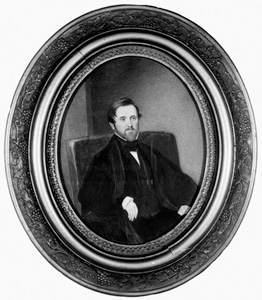 Alexander Jackson Davis, American architect, designed a number of buildings in North Carolina between the 1830s and the Civil War, thus bringing the state into the mainstream of Romantic architecture in America. His work for the state began in the first part of his career when he was a young partner in the prestigious New York architectural firm of Town and Davis (from February 1829, with interruptions, until July 1843). The older partner, Ithiel Town (1784–1844) was an established architect and engineer, inventor of the patented Town truss used for bridges. One of these bridges, constructed in Fayetteville in 1819, made Town known in North Carolina. In 1831, after a calamitous fire in Fayetteville, Davis designed a special Town truss for the reroofing of the Presbyterian church damaged in the fire. Another fire of the same year destroyed the North Carolina capitol in Raleigh. Its replacement, designed by Town and Davis in 1832–34, is regarded as one of the finest examples of Greek Revival style in America.

During these years Davis became a friend of Robert Donaldson, a Fayetteville native and graduate of The University of North Carolina, who had moved to New York. Davis remodeled Donaldson's Manhattan house and designed several structures that Donaldson commissioned for the university and offered to his alma mater. The projects could not be executed during hard times in North Carolina, but in 1844, when the university was ready to embark on a program of campus improvements, Donaldson secured the contract for Davis. By this time the Town and Davis partnership was over and Davis was practicing alone. He designed impressive additions to Old East and Old West in 1844, a ball-room-library (now the Playmakers Theatre) in 1850, and a Presbyterian church in Chapel Hill (now destroyed) in 1848. These structures are within Romantic Classicism with elements freely adapted from various Classical sources. 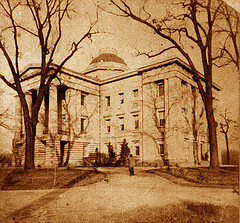 Work at Chapel Hill led to commissions elsewhere in the state. Projects in Greensboro and vicinity began with Blandwood, the home of Governor John Motley Morehead. In 1844 Davis designed an addition to the governor's home in the new Italian style. A view of it was immediately published in an architectural book, which, because of its subsequent popularity, was instrumental in the dissemination of the style. Locust Grove, the home of Morehead's friend, industrialist Edwin Michael Holt, was built in 1849 in what Davis called his American style. His buildings for two girls' schools—Edgeworth Academy, operated by Morehead, and the school that is now Greensboro College—were both later destroyed by fire. Main Hall, for the school that is now Salem College, was built in 1853; it has a Doric porch in the spirit of the earlier Greek Revival.

The North Carolina Hospital for the Insane, a huge Romantic Classical structure in Raleigh, was built in 1850 (most of Davis's work was pulled down after a fire in the twentieth century). Another massive Classical structure, Chamber's Hall at Davidson College, built in 1858 but later destroyed by fire, was Davis's last work in North Carolina before the Civil War stopped construction in the South.

Davis's total work for North Carolina, including ten to fifteen unexecuted projects, was considerable. Extending through a quarter of a century and exhibiting some of his finest buildings, it is a significant chapter in the architect's life as well as the artistic life of the state.