Few people know it, but North Carolina has played a big part in aviation. The first American airplane was built here in 1873. The first heavier-than-air, powered flight took place in North Carolina one hundred years ago, in 1903, and the first helicopter to fly got off the ground here in 1907. These are only a few of the gifts our state has made to aviation. 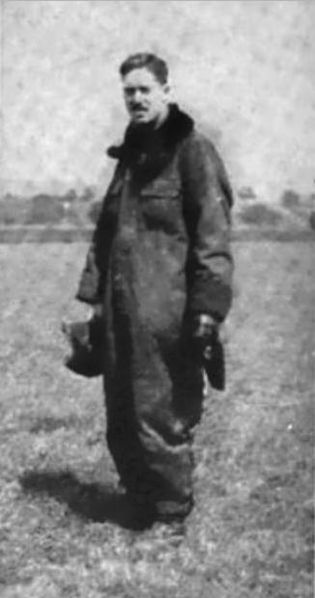 In World War I, one of the best flyers was Kiffin Rockwell of Asheville. In 1916 he helped to organize the Lafayette Escadrille, a squadron of planes flown by American airmen for service with the French army. In their first action, Rockwell became the first American to shoot down an enemy plane. The Escadrille made world headlines and helped to bring the United States into the war in 1917.

Have you seen any of the Hollywood movies that celebrate Tar Heel airmen for their deeds in World War II? Among the best, Twelve O’Clock High tells about Frank Armstrong of Hobgood, with Gregory Peck playing Armstrong’s role. Even better is The Great Escape, featuring Goldsboro’s John D. Lewis, played by Steve McQueen. Memphis Belle honors Asheville pilot Robert Morgan and his World War II bomber of that name. The Lafayette Escadrille recounts the World War I flying career of James Baugham of Washington, North Carolina. A less well-known movie tells the story of George Preddy of Greensboro, who shot down six German planes in five minutes over Berlin in 1944—an amazing feat.

The first American airplane was built by farmer James Henry Gatling of Hertford County. It was an odd-looking, hand-powered machine with wings, propellers, and other features of modern planes. (Its builder was an older brother of Richard J. Gatling, inventor of the first successful machine gun, the Gatling gun.) In his attempt to fly in 1873, Henry Gatling crashed after the aircraft glided nearly one hundred feet. He was not badly hurt. The town of Murfreesboro, near Gatling’s farm, has built a full-size replica of the plane and exhibits it around the state.

One of America’s first dirigibles was built at Winston-Salem in 1902 by tenant farmer Jake Hill. A dirigible, or airship, is a lighter-than-air craft. Hill’s version didn’t fly.

William Luther Paul of Carteret County built his helicopter, called the Bumble Bee, in 1907. Its power came from four motorcycle engines. It rose only a few feet, but it was the world’s first machine to lift itself straight up off the ground. The North Carolina Maritime Museum at Beaufort has a model of the Bumble Bee.

Dr. W. W. Christmas, a Warrenton native, claimed in 1912 to be the first American after the Wright brothers to build and fly his own airplane. But he also made many other such claims, most of which, like this one, turned out to be false or at least doubtful. Christmas was in some ways a genius, but he may have been the greatest liar in aviation history. 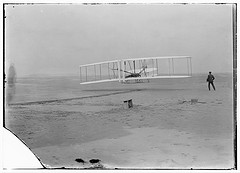 When the Wright brothers began experimenting with their glider at Kitty Hawk in the year 1900, they had all kinds of help from local Outer Bankers. The Bankers helped to assemble the Wrights’ gliders after they were shipped in crates from Dayton, Ohio, the brothers’ home. Outer Bankers ran errands, sailed the brothers back and forth across the sound between Kitty Hawk and Elizabeth City, dug wells, constructed buildings, and helped to get the gliders into the air. On each effort, the machine had to be carried up steep, slippery Kill Devil Hill—and the brothers made hundreds of efforts.

When Orville Wright flew his first airplane in 1903, four Outer Bankers helped it make a good start. Another, John T. Daniels, took the remarkable photo of the plane’s takeoff. There would have been no airplane flight in 1903 without these helpers.

In 1927 Congress passed a bill for the American government to build a handsome monument on Kill Devil Hill to honor the Wrights. Five years later, the project was finished. Before then, few people had ever thought of visiting the area. There were no roads, bridges, hotels, or other things tourists needed, but soon all that changed. After 1923 tourists began to come in large numbers to visit the Wright memorial. Real-estate salesmen found it easy to sell cottages and lots to summer vacationers. The Outer Banks area became nationally known for its beautiful beaches and oceanside attractions, as well as for the Wright memorial.

World War I forced many nations to spend fortunes building airplanes, resulting in a quick improvement in their usefulness. Gradually, as planes continued to improve after the war, North Carolina began to enjoy airplane passenger service, fast shipping of goods and mail by air, and more. Barnstormers, men and women who gave air shows across the state, built a large following of people who came to watch hair-raising stunts.

Other Tar Heels learned to fly and became instructors for pilots. Charles A. Lindbergh, the first person to fly alone across the Atlantic Ocean, received some of his aviation training in 1924 in Texas, where his teacher was Lieutenant William Winston from Wendell.

Pope Airfield, a large army base, was built near Fayetteville after World War I, and another base, Seymour Johnson Air Base at Goldsboro, was constructed for use in World War II. Both remain very important to the defense of our country. Still another air base was the huge blimp, or dirigible, field at Weeksville, which built blimps in World War II to watch the coast for enemy submarines.

More recently, North Carolina has been important to the American space program. The second head of the National Aeronautics and Space Administration (NASA) was James E. Webb of Granville County. Several Tar Heels have become astronauts. Such men and women get some of their training in astronomy at Morehead Planetarium on the campus of the University of North Carolina at Chapel Hill. 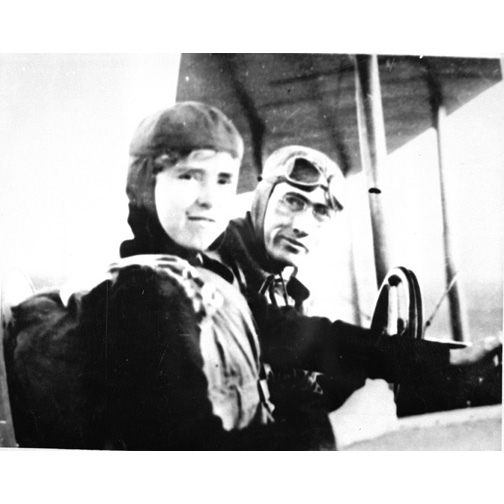 Women and African Americans have contributed much to aviation in North Carolina and in the nation. In 1913 Georgia “Tiny” Broadwick of Henderson became the first woman to parachute from a plane. Viola Gentry of Rockingham County learned to fly in 1924. She was the first North Carolina woman to win a pilot’s license, which she earned in New York, where she resided at the time. Five years later, she set a world record for most time spent in the air on a single flight: eight hours, six and a half minutes. Mary Nicholson of Greensboro was apparently the first American woman to die in an army plane in World War II; she perished in an accident in England.

In 1910 W. F. Johnson, an African American from Greensboro, designed an electric-powered airplane that he felt was “absolutely safe from dangers of turning over in the air or falling.” A model he built of his aircraft won first place at the Central Carolina Fair, but he could not afford to build a full-size plane. William D. Polite, headwaiter at a hotel in Wilmington in 1915, patented a powerful gun for shooting down airplanes. Several North Carolina African Americans flew in World War II with the all-black Tuskegee Airmen unit, the most highly decorated outfit in the war.

It’s for all these reasons, and not just the Wrights’ first flight, that “First in Flight” makes a good motto for North Carolina license plates. We’ve earned it!

Dr. Thomas C. Parramore, a professor emeritus of history from Meredith College in Raleigh, wrote the book First to Fly: North Carolina and the Beginnings of Aviation, published in 2002 by the University of North Carolina Press.

"Kiffin Rockwell," 1916. Wikimedia Commons. This image is believed to be in the public domain.

Thank you for visiting NCpedia and for sharing this question.

That’s a great question! I believe that the lift-off in Carteret County of William Paul's helicopter -- the Bumble Bee -- was the next recorded event, however I am not able to confirm this readily.  Here is a link to an article in NCpedia: http://www.ncpedia.org/aviation/copters-and-gliders

Here are some additional resources that might help investigate this question. One is a list of search results for NCpedia articles dealing with aviation in the state, another is a blog post from the blog of the Government & Heritage Library at the State Library of North Carolina that lists some of the state’s aviation firsts:

You may also want to contact the NC Aviation Museum and Hall of Fame with your question -- http://www.ncaviationmuseumhalloffame.com/index.html.

Finally, I’m including a citation for a book published in 2002 on early aviation in the state.  The link goes to WorldCat where you can search for a library near you that may have the book in its collection.

I hope this helps!  Please let me know if you have any additional questions.