Annie Lowrie Alexander, physician, teacher, and philanthropist, was born near the town of Cornelius in Mecklenburg County of Scotch-Irish ancestry. Her father was Dr. 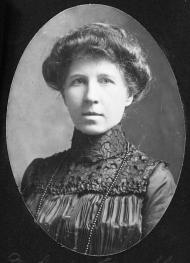 Miss Alexander, following early education under a private tutor and her father, entered Woman's Medical College in Philadelphia, from which institution she was graduated in 1884. After a year as intern at her alma mater, she became an assistant teacher of anatomy in the Woman's Medical College of Baltimore, Md., while at the same time practicing medicine privately. In 1887 she returned to North Carolina to become the first woman to practice medicine in the South, having obtained her license in 1885 from the Maryland Board of Medical Examiners (in a class of one hundred candidates, in which she was the only woman, she made the highest grade). Later she did postgraduate work in the New York Polyclinic. She continued to practice her profession until her death, serving on the staffs of the Presbyterian and St. Peter's hospitals of Charlotte and acting for twenty-three years as physician for the Presbyterian College for Women (later Queens College).

In 1890 Miss Alexander's parents moved to Charlotte and established their home with their daughter at 410 North Tryon St.

During the occupancy of Camp Greene in Charlotte during World War I, Miss Alexander was appointed acting assistant surgeon, her principal work being the medical inspection of thousands of school children. Along with her medical practice, she performed social welfare work, especially among women and girls; for many years she was on the board of managers of the Charlotte YWCA, and later she was a trustee and the examining physician for the physical education department of the YWCA. She was physician and board member of the Florence Crittendon Home and a board member of the Associated Charities and of the Cooperative Nursing Association.

Miss Alexander was noted for her femininity, gentle manners, and cultured womanhood. Baptized in childhood in the Bethel Presbyterian Church, she later became a loyal member of the First Presbyterian Church of Charlotte. She was a member of the Daughters of the American Revolution, the United Daughters of the Confederacy, and the Charlotte Woman's Club. She was an honorary member of the North Carolina Medical Society and of the Southern Medical Society. She served as president of the Mecklenburg Medical Society and as a vice-president of the Women's Physicians of the Southern Medical Association.

She died of pneumonia in Charlotte, after four days of illness, and was buried there in Elmwood Cemetery.