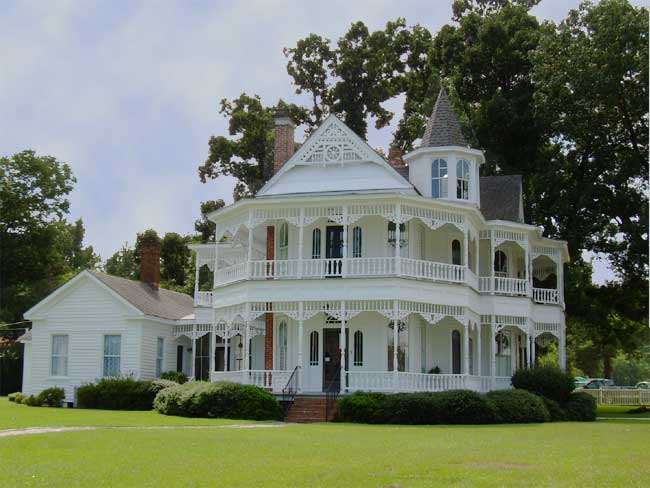 Farming, especially cotton farming, was very hard work during the 1800s. Toward the end of that century, cotton was the main cash crop for the southeastern part of Richmond County and other areas of North Carolina. Small landowners worked long hours to harvest the crop. Country schools operated on a much shorter schedule to allow children to be free to help plant and pick cotton. Large landowners rented small farms “on halves” to other farmers. All of the work was done by hand, with only mules for added power.

During this time, many forward thinking people across North Carolina were inventing machines to make farming easier. One such person was John Blue.

John’s father, Angus Blue, got his own farm in the 1850s. John was the eldest of nine children. Two of his brothers made names for themselves in the political arena. Lauchlin was a state senator, and Angus was one of the first county commissioners when Scotland County was formed from Richmond County in 1899. (Lauchlin was one of the Richmond County legislators who proposed the formation of Scotland County.) The other children were Lucia, Mary Ann, Margaret, Nancy, James Franklin, and Luther.

Even before he left his father’s farm, John Blue was interested in making items in the family’s blacksmith shop. Many of the tools he made were crude, since he had no real training in the field. Nonetheless, it was there that John invented the first cotton-stalk cutter. Being a cotton farmer, he was very interested in designing tools that would make cotton farming easier. His inventions made it possible to use more mule power, rather than man power, to produce a cotton crop.

After buying a farm in 1883, Blue continued to improve and develop items for use on the farm. He invented a cotton planter made of iron. He also invented a machine to spread fertilizer.

In 1886 Blue and his father established a business on John’s land. In the shop, the younger Blue repaired cotton gin parts and other farm tools and equipment. The small business grew into a large plant where implements were made. Blue built a foundry—a building that contained equipment to melt iron and cast it into parts he needed.

During the early 1900s, Blue obtained patents for all of his inventions. He continued to ensure that patents protected all of his improvements. Because the tools that Blue developed were low in cost, they were available to many farmers. They were early steps in making farming depend on machinery rather than human power.

John and his wife, Flora McKinnon, had three children: Edna Earl, Mary Margaret, and John Jr. Mary died in infancy. John Jr.—who was sixteen years younger than Edna—had a very sharp business mind. Under his leadership, the business grew, even after John Sr.’s death in 1935. In 1945 a fire destroyed the foundry. John Jr. thought the company would make more money if it were closer to the source of iron and coal. A foundry became available in Huntsville, Alabama. He bought it and eventually moved the whole operation to Alabama.

John Jr. was killed in an automobile accident in 1968. The Blue family had sold the business to New York State firm STV in 1967, but it kept the John Blue Company name. In 2000 the company combined with a California company, CDS, and now operates as CDS-John Blue Company. It produces large sprayers for agriculture.

At the time of this article’s publication, Sara M. Stewart, a retired public school speech therapist, was a volunteer with the Scotland County Historic Properties Commission.