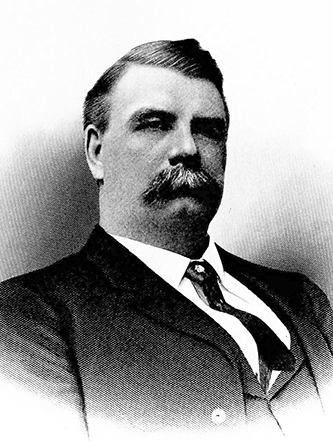 John Cameron Buxton, attorney and banker, was born in Asheville, the son of Jarvis and Anne Cameron Buxton. He obtained his preparatory education in the local schools and at St. Clements Hall, Ellicott City, Md., from which he was graduated in 1869. He then attended Trinity College, Hartford, Conn., for three years (1869–72) and spent one year (1872–73) teaching in Edenton. The following fall he entered Hobart College, Geneva, N.Y.; he was graduated with the B.A. degree in 1874 as salutatorian of his class.

Having been admitted to the North Carolina bar in January 1875, after reading law under Judge John L. Baily of Asheville, Buxton went to Winston, where he was first associated with John W. Alspaugh in the practice of law. He opened a private office shortly thereafter and practiced independently until 1884, when he formed the law firm of Watson and Buxton, through association with Cyrus B. Watson. The firm was further expanded in 1896 to include the son of the senior partner and became known as Watson, Buxton, and Watson. In later years, Buxton returned to independent practice. He was recognized as a capable trial lawyer, and at one time he or his firms represented several railroads and other prominent corporations and individuals in the Winston-Salem area.

Through his law work, Buxton became active in banking circles. He was president of the First National Bank from 1890 to 1893 and was instrumental in its merger with the People's Bank. He was president from 1908 to 1917 of what became the Winston-Salem Savings and Loan Association.

He entered local politics in 1883 when he was elected mayor of Winston. Without seeking the office, he was nominated and elected from the Thirty-second Senatorial District to the North Carolina Senate, where he served for one term in 1885. He had been a delegate to the 1884 Democratic convention in Chicago, where he was influential in the nomination of Grover Cleveland for president. He was chairman of the State Democratic Convention in Raleigh in 1887 and was an unsuccessful candidate for the U.S. Congress in 1900.

Always active in civic projects, Buxton served for twenty-seven years as president of the local grade school commission and was credited with securing several new school buildings for the city. Another successful effort produced a Carnegie Library for Winston. In addition to memberships in bar associations—American, North Carolina, and Forsyth County—he was a member of four fraternal groups, Elks, Odd Fellows, Knights of Pythias, and Order of Eagles, and also a member of the Twin City Club.

Throughout the years he was an active member of St. Paul's Episcopal Church. As a delegate to the general convention of the church in San Francisco in 1901, he was responsible for the defeat of a resolution that would have changed the name of the church from its traditional Protestant Episcopal. He was also a delegate to the general convention three years later in Boston in 1904.

Buxton was married on 16 Oct. 1877 to Agnes Cornelia Belo, daughter of Edward Belo, a leading citizen of Salem. They had four children: Cameron Belo, Caro Fries (Mrs. Henry Lee Edwards), Anna Nash (Mrs. Curt Beck), and Jarvis (who died in childhood). Buxton died at his home in Winston-Salem and was buried in that city.

Monroe, Joel Henry. A Century and a Quarter of History: Geneva from Seventeen Hundred and Eighty-seven to Nineteen Hundred and Twelve. 73. http://books.google.com/books?id=htgwAQAAMAAJ&pg=PA73#v=onepage&q&f=false (accessed December 12, 2013).