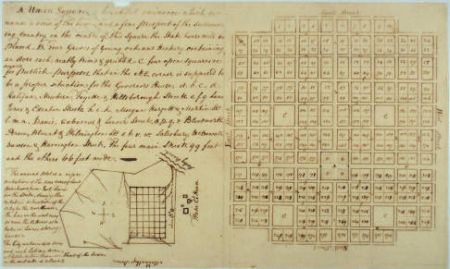 William Christmas, surveyor, cartographer, legislator, and militia and civil officer during and after the Revolution, was a son of John and Mary Graves Christmas. Despite a statement in his obituary describing him as a native of North Carolina, there is evidence to indicate that he was born in Hanover County, Va. His parents moved in 1757 to North Carolina (present-day Warren County), where John was a large landowner and captain of the Granville County militia in 1763. John acquired about ten thousand acres of land in Orange County, moved there in 1777, and died there six years later, having lived to see his five oldest sons serve as officers during the Revolutionary War.

It is presently not known where William Christmas was educated, but he may have acquired his skill as surveyor from his early associations with General Thomas Person, a Granville District surveyor, and with his own cousin, Richard Henderson, of Transylvania fame. General Person's estate records show that he had given Christmas his surveying instruments prior to his death in 1800, and Christmas's obituary credits him with helping Henderson to lay out Boonesboro in 1774. Besides his outstanding accomplishments as a surveyor in several North Carolina and Tennessee counties, Christmas is credited in his obituary with the laying out of towns in Kentucky, South Carolina, and Georgia. Having been appointed as surveyor for Bute County in 1778, he was one of the three surveyors named in the Bute County land grants and was responsible for running the line to divide Bute County into Warren and Franklin counties. He gave bond as county surveyor at the first Warren County court, May 1779, and it may have been after he resigned this office a year later that he laid out the towns of Warrenton and Louisburg, county seats of the two new counties. As deputy sheriff of Warren County, he returned the sheriff's account for the preceding year at the May court in 1780.

Christmas was commissioned ensign in the Bute County militia in 1777 and, from 1780 until the end of the Revolutionary War, served as staff officer of the Halifax Military District, Quartermaster Division, as Warren County commissioner for "collecting provisions tax and securing supplies and provisions for support of the Army and Navy of this and the United States in the Southern Department." On 12 Oct. 1780 the board of war, meeting at Hillsborough, commended him for his zeal and integrity in the service of his country not only as commissioner for collecting provisions but also as issuing commissary to the troops. Brigadier General Jethro Sumner wrote Colonel Philemon Hawkins on 28 Jan. 1782, requesting that William Christmas, Esq., as "the most judicious person," impress two men with horses to act as courier for him. Christmas commanded the independent rifle corps under General Nathanael Greene at the battle of Guilford Court House.

Before the close of the war, Christmas had married Abigail, daughter of Atkins and Sarah Jones McLemore. Her father had been a member of the Granville County militia in 1754, represented Bute County in the House of Commons in 1778–79, and was one of the commissioners and trustees for establishing the town of Warrenton in 1779. When the North Carolina Provincial Congress held at Halifax in April 1776 appointed two men from each county to obtain firearms for the use of the troops, Atkins McLemore was one of the men from Bute County. In 1778, McLemore was appointed one of the commissioners for selling the remnants of the public gun factory in Bute County.

Christmas was appointed second major in the Franklin County militia in 1787, the year he moved to that county. He was promoted to first major in 1791 and lieutenant colonel commandant in 1795, serving in this last capacity until his successor was appointed by the council of state in 1800, on the eve of his departure for Tennessee. The Franklin County court minutes show that he served there as road juror, Halifax District court juror, tax collector, bridge commissioner, and county surveyor before he was elected to the state senate in 1792; previously, he had served as a representative from Franklin County in the constitutional convention of 1789 at Fayetteville, where he voted in favor of ratifying the U.S. Constitution.

In 1792, while Christmas was serving as senator from Franklin County, the commission for establishing a state capital in Wake County appointed him to survey the land and lay off the city that became Raleigh; when the initial sale of the lots was held, the commission named him its clerk. The plat (presumably in Christmas's hand) of the thousand-acre purchase of land and the original boundaries and streets of Raleigh is preserved in the State Archives.

Christmas was one of the surveyors whose work underlay the famous Price and Strother Map (1792), the first map of North Carolina from actual survey. His brother, Nathaniel, collaborated with Jonathan Price in planning and financing this map.

At the General Assembly of November 1799, Christmas was chosen as entry taker and surveyor general of North Carolina's reserved lands in the territory that had become the State of Tennessee. On his journey to Tennessee, he stopped on 5 Mar. 1800 in Orange County, where his mother was still living. He arrived in Nashville by 1 Apr., set up the entry office, and began surveying, having determined to move his nearest relatives and friends to Tennessee by the fall and to share the destinies of the state for life. In addition to the duties for which he had come, he was appointed by the Tennessee General Assembly as principal surveyor for the First District.

Christmas died in Williamson County, Tenn., survived by his wife and three of his four daughters. In Williamson County (where he owned much land), in the old Steele graveyard off the Lewisburg Pike, on Flat Creek between the Marshall County line and the Maury County line, there is a broken stone that probably marks his grave, though "William Chri—" is all that is legible.