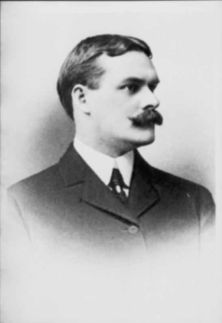 Stuart Warren Cramer, leader in the development and improvement of textile mills, inventor, and leader in the Republican party in North Carolina, was born in Thomasville to John Thomas and Mary Jane Thomas Cramer.

Cramer's education at the U.S. Naval Academy, from which he was graduated in 1888, gave him a love of the navy that led him to promote its interests in his native state. He helped found and was the first commander of the North Carolina Naval Reserve in 1890. He also served on the board of visitors of the Naval Academy from 1912 to 1926.

Although, Cramer studied naval engineering at the academy, he decided to turn to mining engineering to help with his family's many interests. He studied at Columbia University School of Mines from 1888 to 1889 and left to take a position as head of the U.S. Mint in Charlotte. Within four years he had shifted to a position as chief engineer and manager of D. A. Tompkins Company, which ran an iron foundry and distributed cotton mill machinery and supplies. After two years he left to establish his own engineering and contracting firm in Charlotte to build textile mills. Over the next ten years (1895–1905) he designed and/or equipped about one-third of the new cotton mills in the South. He turned his profits into his own textile mills, especially those at Cramerton, where, under the influence of a model plantation owned by his grandfather, he developed a model mill community. For Cramerton Village he built schools, churches, recreation centers, playgrounds, and other embellishments, to give his workers some of the best living conditions in the textile community.

One of Cramer's chief contributions to textile progress came through his engineering genius. He is credited with sixty patents, including an improvement in the humidification system for textile factories that became known as air conditioning. He also developed a system of individually driven electric motors for machines, when he saw its advantages over the central power plant with belts and shafts. Cramer wrote on textile industrial engineering, industrial welfare, and related subjects. His best-known work was the four-volume Useful Information for Cotton Manufactures, published from 1904 to 1909.

Realizing the need to provide adequate power to supply textile mills, Cramer collaborated with James B. Duke in founding Duke Power Company, of which he became a director. To promote better cooperation among textile manufacturers, Cramer organized the American Cotton Manufacturers Association and served as its president from 1916 to 1917. He combined northern and southern textile interests in the National Council of American Cotton Textile Manufacturers, presiding over this new creation in 1917–18 and 1920–27. For his efforts in promoting the textile interest in tariff legislation, he was awarded a medal by the Association of Cotton Manufacturers in 1913.

Cramer was a leading member of the Republican party in a state where the party had lost its majority. A delegate to several national conventions, he was part of the official committee to notify Herbert Hoover of his nomination to the presidency by the party. In 1931, Hoover named him a member of the president's Organization on Unemployment Relief.

Cramer married three times. His first wife was Bertha Hobart Berry of Portland, Me.; they married in 1889 and had two children: Katherine Hobart, who later married James R. Angell, a president of Yale University; and Stuart Warren, Jr., who took control of many of his father's interests later in life. When Bertha Cramer died, Stuart Cramer in 1896 married her sister, fulfilling his first wife's deathbed wish. The second Mrs. Cramer died in 1897. In 1902, Cramer married Rebecca Warren Tinkham, sister of George Holden Tinkham, a congressman from Boston; their son was George Bennet.

Cramer died in Charlotte of a heart ailment and was buried there on 4 July 1940 in Elmwood Cemetery.

I was blessed to live in