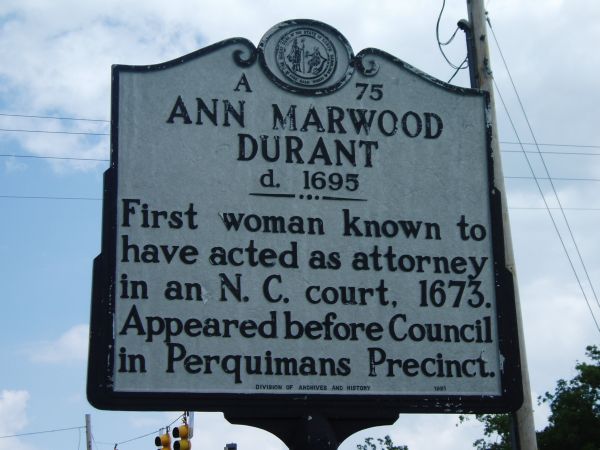 Ann Marwood Durant (Durand, Duren), the first woman named as an attorney in extant records of North Carolina, came to the colony with her husband, George Durant, about 1661. Ann Marwood married Durant on 4 Jan. 1658/59 in Northumberland County, Va. Her earlier history is not known. The couple settled first in Nansemond County, Va., but in 1661 or earlier they moved southward to the area then called Roanoke, which was soon to be granted to the Carolina Proprietors and named Albemarle. There they settled on the peninsula now called Durants Neck, in present-day Perquimans County, where George Durant bought an extensive tract of land from the local Indians.

Both of the Durants contributed substantially to the newly begun colony to which they had moved, although George's political activities are better known than Ann's less conspicuous contributions. During his frequent absences on public business or in pursuit of his occupation as mariner, Ann ran their plantation, acted as attorney for her husband and for others on occasion, and provided a variety of services and commodities for neighboring settlers. Not the least of her contributions was that of providing accommodations for the numerous officials and others attending meetings of the Assembly, Council, and courts, which frequently were held at the Durant home as well as informal meetings of politicians. During the period of civil strife that characterized the age, prisoners were sometimes lodged there.

The distinction of being the first woman known to have appeared as an attorney in a North Carolina court comes from Ann Durant's appearance on 25 May 1673 as attorney for a seaman named Andrew Ball. She successfully brought suit for wages due to Ball for service on a vessel called the Two Brothers . That she also acted as attorney for her husband is evidenced by an extant power of attorney, dated 17 May 1675, in which George empowered Ann to bring suit and take other actions to collect debts due him or to recover property belonging to him. Unlike her appearance on behalf of Ball, Ann's actions as attorney for her husband are not recorded in the few surviving official records of the period. That she did so act, however, is indicated by the endorsement on George's letter of attorney, which shows that the document was proved and officially recorded on 9 Oct. 1677.

Surviving records also show that Ann appeared in court on her own behalf from time to time to sue for debts owed her or as defendant in suits against her. The debts at issue in such suits arose in connection with her business activities, which apparently included operation of an inn or at least a less formal provision of board and lodging. Her bills contain such items as "his accommodations," "the Trubell of my House," and "attendance in his sickness." Other services listed in her bills include making shirts and leather breeches, making coffins, and arranging funerals. Among the articles for which she sought payment were beverages (rum, cider, and "quince drink"), stockings, cloth, thread, planks, nails, and corn.

Ann Durant's business and court room activities were combined with the bearing and rearing of a large family. She had nine children: George (b. December 1659), Elizabeth (b. February 1660/61), John (b. December 1662), Mary (b. February 1665/66), Thomas (b. August 1668), Sarah (b. January 1670), Martha (b. August 1673), Perthenia (b. August 1675), and Ann (b. April 1681). The eldest child, George, died shortly before his twelfth birthday, but the others lived to adulthood. In addition to her own children, Ann reared two of her grandchildren, Ann and Elizabeth Waller, children of her daughter Elizabeth, who were orphaned in infancy or early childhood.

Ann Durant survived her husband about a year.