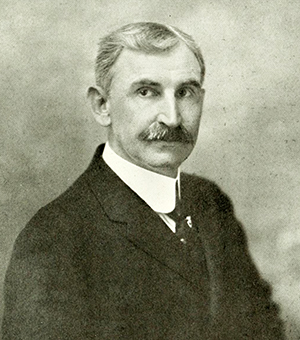 Jesse Harper Erwin, textile executive, was born at the family estate, Bellevue, near Morganton, of Scotch-Irish ancestry. His father, Joseph J. Erwin, described as a "model of the old-time Southern gentleman," was a graduate of Washington College (Washington and Lee University) and served as vestryman of Grace Episcopal Church in Morganton, clerk of the superior court, member of the state legislature for several terms, and member of the staff of Governor W. A. Graham. His mother, Elvira Holt Erwin, was the daughter of Dr. William Raney Holt of Lexington who served as the president of the first North Carolina State Fair.

Erwin was the ninth of eleven children and grew up at Bellevue within view of Grandfather Mountain. He received his education in private and public schools before entering Catawba College in Newton. At the age of nineteen he moved to what was then Company Shops (Burlington) where he worked for approximately a year in a general store before joining his brother-in-law, Lawrence S. Holt, Sr., in the management of Aurora Cotton Mills. Later he became secretary-treasurer of the E. M. Holt Plaid Mills in Burlington.

With fifteen years of experience in textiles, Erwin moved to Durham to accept the position of secretary-treasurer of the Durham Cotton Manufacturing Company, the first textile mill in Durham, founded by Julian S. Carr in 1884 and acquired by Benjamin N. Duke in 1899. He also became associated with Pearl Cotton Mills as secretary-treasurer. Both of these companies were involved in the manufacture of ginghams and a variety of other cotton goods. Erwin was a member of the board of directors of the Durham and Southern Railway, Oxford Cotton Mills, Peoples Bank located in East Durham, and Erwin Mills, which was managed by and named for his brother, William A. Erwin. He was influential in the organization of Randolph Mills, Inc., of Franklinville, where he served as chairman of the board of directors for a number of years until his death.

On Governor Charles B. Aycock's staff from 1901 to 1905, Erwin served as an aide-de-camp with the rank of colonel. He particularly enjoyed accompanying Governor Aycock to the South Carolina Interstate and West Indian Exposition, in Charleston, where President Theodore Roosevelt reviewed the North Carolina troops after the exposition opened on 1 Dec. 1901. In Durham Erwin was a charter member of the Durham Kiwanis Club and served on the board of directors of the Durham Young Men's Christian Association.

A lifelong member of the Episcopal church, Erwin served a number of terms as a member of the vestry of St. Philip's Episcopal Church and later in the same capacity at St. Joseph's Episcopal Church, a church built as a memorial to his parents near Erwin Cotton Mills (afterward a part of Burlington Industries, Inc.) in Durham. On 5 Nov. 1895 he was married in St. Luke's Episcopal Church, Atlanta, to Eleanor Drane Hayes of Americus, Ga. The wedding was held in Atlanta while the Cotton States and International Exposition was in progress. Their children included Mary Erwin Michie, Eleanor Erwin Griswold, Josephine Erwin MacManus, Jesse Harper, Jr., and Eugene.

Erwin's home, Sunnyside, was located near Erwin Mills. He was buried in Maplewood Cemetery, Durham.

John Hugh McDowell, History of the McDowells, Erwins, Irwins, and Connections, Being a Compilation from Various Sources (1918).