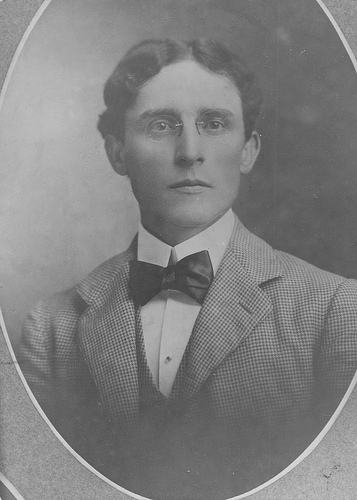 Robert Lee Flowers, educator and university administrator, was born at York Collegiate Institute in Alexander County, the son of George Washington and Sarah Jane Haynes Flowers. His father, a onetime instructor at the institute, entered the mercantile business in nearby Taylorsville, where the family moved in 1883. Robert, the eldest of nine children, was graduated from Taylorsville Male Academy in 1887. He then received a congressional appointment to the U.S. Naval Academy at Annapolis, Md., completing the requirements for his commission in 1891. However, young Flowers declined a naval career and instead accepted an appointment as instructor in mathematics and electrical engineering at Trinity College, then located in Randolph County but already constructing a new campus in Durham. Indeed, one of Flowers's first responsibilities at the college, in the summer of 1891, was to wire the new buildings in Durham for electricity.

Flowers was one of only four faculty members who moved with the college from Randolph County to Durham early in the fall of 1892. There, as "professor of pure and applied mathematics," he quickly established a reputation as an effective and kindly instructor in the often mystifying science of numbers. He built a handsome home on the Trinity campus that housed a succession of younger brothers and other boarders until his marriage; it is still used for campus activities. After John C. Kilgo, a strong-willed churchman, became president of Trinity in 1894, Flowers assumed the role of mediator, softening the frequent confrontations among the administration, an independent-minded faculty, and spirited students. Although not a prolific scholar, he contributed to the intellectual climate of the college. He served as an editor of the Christian Educator (1896–98) and as a founding officer of the South Atlantic Publishing Company, sponsor of the lively and sometimes controversial South Atlantic Quarterly (1902).

After Kilgo left Trinity in 1910, there were changes in the college's administration. William Preston Few became president and Flowers was appointed "Secretary to the Corporation." The latter's duties included managing the institution's official correspondence and records and acting as liaison with the board of trustees. Gradually these administrative chores took more of Flowers's time, although he remained a nominal member of the mathematics department until 1934.

In 1923 Flowers, who as secretary had also overseen the business administration of the college, was named to the post of treasurer as well. This responsibility assumed great importance as tobacco millionaire and power tycoon James B. Duke neared completion of his great plan to establish a charitable trust for the benefit of the people of the Carolinas. In the fall of 1924, Flowers worked personally with Duke and his advisers, ironing out the details that would create the Duke Endowment and transform Trinity College into Duke University. Flowers had already been busily preparing for the public announcement of the Duke benefaction in December 1924. He quietly conducted a campaign whereby Trinity College obtained options on large tracts of land on the western edge of Durham. This property became the site of the university's new main campus and formed the core of a preserve soon to be known as the Duke Forest. When the new university was organized in 1925, Flowers was named vice-president in the business division. Flowers, President Few, and William H. Wannamaker, vice-president in the educational division, became the "triumvirate" that led the once obscure institution to international renown. 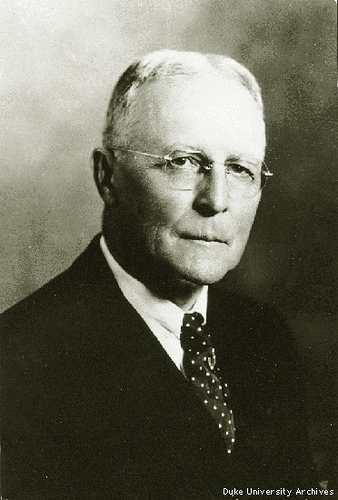 His warm manner, good sense, and devotion to duty made Flowers an attractive and reliable member of governing boards. In 1926, following the death of James B. Duke, Flowers was elected to succeed the philanthropist as a trustee of the Duke Endowment; the next year he was named to the board of trustees of Duke University. These positions, combined with his vice-presidency, allowed him to make significant contributions to the development of the university. Certainly no single man at Duke was more beloved and appreciated for his loyalty and kindness than "Professor Bobby" Flowers.

When President Few died suddenly in October 1940, Flowers, as senior vice-president, was immediately named acting president of the university. In January 1941, when the full board of trustees met to consider a replacement for Few, it elected Flowers to the post by acclaim. Despite his then considerable age of seventy, Flowers was in good health, alert, and active, and a successful, if not lengthy, incumbency was anticipated. However, the American involvement in World War II and the ensuing commitment of the university to national defense for the next five years robbed Flowers's presidency of its opportunity for independent development. By the time the school resumed its traditional program, Flowers was gradually taking a less active role in the administration of the university. Early in 1948 he announced his imminent retirement upon the selection of a new president. In November of that year, as A. Hollis Edens assumed the leadership position at Duke, Flowers was named to the newly created post of chancellor, an advisory position of lifetime tenure. At the time of his death, he had served Trinity College and Duke University for over sixty years.

Flowers's educational and civic interests were by no means restricted to Duke University. He served on the board of trustees of the North Carolina College for Negroes (now North Carolina Central University) in Durham for many years (1923–51, chairman from 1926), of Greensboro College, of the Methodist Orphanage (Raleigh), of the Masonic Orphanage (Oxford), and of Lincoln Hospital (Durham). He was an active Rotarian and a director of the Durham Chamber of Commerce and the Durham YMCA. Flowers was an influential layman in the Methodist church, serving on the board of education and as a delegate to the general conference. He also was a director of the Durham and Southern Railway and of the Fidelity Bank of Durham. In 1946, President Harry S Truman appointed him to the board of visitors of the U.S Naval Academy. Flowers took all of these responsibilities seriously, attending meetings whenever possible and never merely lending his name to a good cause. In addition, he belonged to numerous honorary and fraternal organizations, including Phi Beta Kappa, the North Carolina Academy of Science, and Alpha Tau Omega. He received honorary degrees from Trinity College (A.M., 1904), Davidson College (LL.D., 1927), and The University of North Carolina (LL.D., 1942).