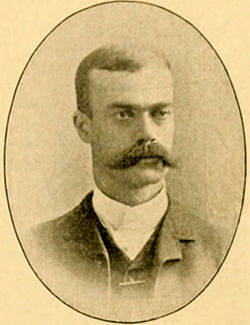 Thomas Blount Fuller, manufacturer, civic leader, and Presbyterian layman, was born in Fayetteville of English, French, and Scottish ancestry. He was the son of Bartholomew Fuller, an attorney, and Wilhelmina Haldane Bell Fuller, daughter of architect William Bell, of Scotland, who, after emigrating to America in 1834, assisted in the construction of the U.S. arsenal in Charleston, S.C., and designed and built the U.S. arsenal in Fayetteville.

Fuller's formal education began and ended in the Fayetteville schools, as he was prevented from entering his father's alma mater, The University of North Carolina, by its closing in 1871 for five years because of adverse conditions in the state after the Civil War. He was, however, a prolific reader who, as a child, often had to be physically restrained from reading and ordered outdoors to play, so he was in large measure self-educated.

His early business ventures are unknown, but, after moving to Durham in 1881, he became associated with Julian S. Carr, pioneer tobacco and textile magnate. In 1894 he was made the first manager of the Golden Belt Manufacturing Company, organized by Carr and John Smith, of Durham, to make cloth bags for tobacco, a procedure done by hand until that time. Fuller later became president of the company, which began to manufacture hosiery as well as tobacco bags, and which still later engaged primarily in gravure printing, a process especially suited to the printing of labels for tobacco products and bottled beverages.

As a prosperous businessman, Fuller was able to gratify his humanitarian instincts. One of his initial projects was the Associated Charities of Durham, which he organized with the help of a Methodist minister, the Reverend W. L. Cunninggim, after a severe blizzard in 1899 left many people destitute. Financed first by personal contributions and later by appropriations from the city council, the organization evolved into a Board of Charities and Welfare chiefly through Fuller's efforts, and eventually became affiliated with the North Carolina Department of Public Welfare. Fuller was also concerned with sanitary conditions and the prevention of contagious diseases. After a smallpox epidemic in 1909, when a board of health was organized, he was made one of its five members.

Because of his intense love for books and reading, Fuller was an enthusiastic supporter of a movement to start a public library in Durham and became, with Julian S. Carr and Mrs. Eugene Morehead, one of the earliest and heaviest contributors to that cause. On 1 Feb. 1898, the first library in North Carolina available to the public without payment of dues or fees opened in Durham; it was also the first in the state to receive municipal support, and by 1911 had outgrown its first quarters. It is on record that, faced with the need for a new building, "the Trustees, through the persistent efforts of Thomas B. Fuller, secured from the Carnegie Corporation an appropriation of $32,000 toward a new plant to cost $40,000, with the proviso that $4,000 be appropriated annually toward maintenance by the local government." As had been the case with Associated Charities, the Durham Public Library came into being and was expanded largely because of Fuller's enthusiastic and unflagging support.

In addition to his civic ventures, Fuller gave a great deal of time and financial assistance to the First Presbyterian Church. In 1892, his concern for employees of the Golden Belt Manufacturing Company who wanted and needed Christian education led him to establish a Sunday school in the eastern section of Durham known as Edgemont, where the company was located, and to serve as its superintendent. Eventually the school became Edgemont Chapel, a mission of First Presbyterian, and Fuller transferred his membership there in order to give it full support. When the congregation became large and affluent enough to construct a larger building, it was named the Fuller Memorial Presbyterian Church in his honor.

Probably because his father's death at fifty-two left Fuller solely responsible for his mother, four sisters, and one eight-year-old brother, he never married. When his health declined in 1926, he went to Battle Creek, Mich., in search of a cure. He died there early in the following year and was buried in Durham at Maplewood Cemetery.