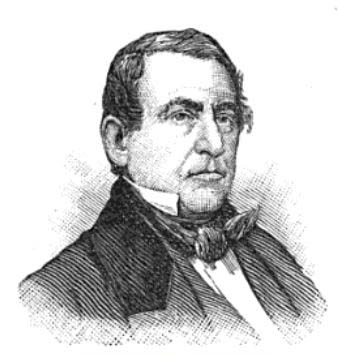 Meredith Poindexter Gentry, tennessee congressman, was born in Rockingham County, N.C., the youngest of eleven children of Watson Gentry, a prosperous farmer and Revolutionary War veteran, and Theodosia Poindexter Gentry. When he was four, his parents moved near College Grove, Williamson County, Tenn., a migration coinciding with that of other Gentrys who settled in the mid-state area. Essentially self-educated, Gentry read widely. Encouraged by his father to study law, he showed no taste for the profession but displayed an aptitude for oratory and politics. He reportedly delivered his first public speech before he was twenty-one. In 1835 he became a Whig representative in the legislature, serving two terms. Here he stood strongly against a Bank of Tennessee, asserting that the prerogatives conferred might sometime redound to the public injury—a stance that foreshadowed his opposition to a powerful presidency.

So valuable were Gentry's kith and kin, so formidable his "speechifying," and so Whiggish the local temper, that his constituencies gave him six nonconsecutive terms in Congress between 1839 and 1853. Pleading family affairs and yearning to return home, he declined candidacy in 1843. The following year he lost both his wife, Emily Saunders (granddaughter of Colonel John Donelson of Davidson County), whom he had married in 1837, and his father. He returned to Washington in 1845; during this decade he was also a gubernatorial possibility.

In the House Gentry soon became prominent, and eventually, as a friend of John Adams and Henry Clay and an intimate of Daniel Webster, Zachary Taylor, and Millard Fillmore, important in party councils. Fundamentally he may be seen as a constitutionalist, albeit something of a latitudinarian; Southern states-righter, though never an "ultra"; and partisan, exorcising the demons of loco focoism. He inveighed against extension of executive power via general appropriation, patronage, and veto, yet he advocated assumption of state debts and declared that authority for internal improvements was "from its very nature inherent in the Government." Defending the planter class, he insisted that slavery, with ameliorations, should be retained, yet he urged that abolitionist petitions be considered. In a speech that became a campaign document, he justified log-cabin and hard-ciderism as depriving the democracy of its most successful weapon, the appeal to popular prejudices. He anathematized the "traitor" John Tyler, who recruited a "party not unlike 'a gang' during the Revolution . . . who fought for neither side" but "sold beef to both armies." He poured hot shot into James Polk's 1846 message, charging that the Mexican War was waged for conquest and that "a usurping President was more dangerous . . . than a hundred Mexican armies." At the decade's end Gentry ardently supported Zachary Taylor and, despite reservations, endorsed the Compromise of 1850.

The Tennessean was nearing his zenith. Notwithstanding Whig restiveness at home, he polled 5,766 votes against token opposition in 1849; two years later, he had no opponent. He worked closely with Taylor, who offered him the postmaster generalship, and with Fillmore. Meanwhile, in November 1846 he had married Caledonia Brown, daughter of Dr. Thomas and Eliza Brown of Columbia, Maury County—"a tall girl" of twenty-four, "beautiful and accomplished, and a small fortune of $15,000."

Yet Gentry was inevitably drawn into the acrimonious debates that accompanied the Mexican Cession. Increasingly he shared the South's apprehensions about the future. Despising John C. Calhoun's Southern Rights movement, he nonetheless distrusted his own party's antislavery wing. During a Whig caucus in December 1849, Southern rebels offered a resolution designed to head off "Wilmotism"; rebuffed, Gentry and others walked out. In the ensuing contest for the House speakership, he was the bolters' candidate.

But the schismatic had not "effectually prostrated himself." Indeed, he had abundant fellowship, for thousands of Tennessee Whigs left the party, most embracing Know-Nothingism. He became their gubernatorial candidate in 1855, chosen not by state convention but by general acclaim. In Governor Andrew Johnson, who would subsequently call him "a Fourth of July orator," he faced a redoubtable foe. During a hot, dusty summer they shared time without personal rancor, addressing such issues as Know-Nothingism, which Johnson attacked and Gentry defended; a temperance law, which the governor unequivocally opposed whereas Gentry preferred limited liquor sales; the plebeian's "unorthodox" democracy and the patrician's apostasy. In the end Gentry lost by 2,157 votes, carrying both east and west, but lagging by nearly 5,000 in rural middle Tennessee counties.

Again he returned to the farm in a sequestered valley in Bedford County. By 1860 his estate, valued at $120,000 encompassed 900 acres, with fifty slaves, horses and mules, cattle, sheep, and swine. He produced wheat, corn, potatoes, butter, and wool. Hillside, his home, built earlier in the decade, was handsomely furnished, with a library of several hundred volumes. Although retirement had its compensations, Gentry still liked an audience. On occasional Sunday afternoons, he "would stand on the front balcony," friends and neighbors ensconced on the lawn, and "inform them of current events and the latest political news."

For one who cherished the old flag, disunion and war were depressing news. The South seceded, and Tennessee eventually followed suit; ironically, William Seward had recommended Gentry for the Lincoln cabinet. Why go South? Subsequently he was quoted as saying that he neither believed in the right of secession nor considered it a panacea: "but a d——d old worm-eaten, rickety stern-wheel boat . . . came along"; and when, despite his pleadings, friends, neighbors, and kinsmen rushed pellmell aboard, "I shouted to them hold on! . . . we'll all go to Hell together." First he went to Richmond. As a representative in the first regular Confederate Congress, he had little stomach for debate, made one desultory speech, attended only one session, and did not seek reelection. Yet in 1863–64 he sold his estate, books and "One fine Gold Watch" included, investing in Confederate securities. Peace found him destitute, dependent upon his eldest daughter who had married a wealthy ironmonger thirty-four years her senior. He died soon afterward and was buried in Mt. Olivet Cemetery near Nashville. This magnificent orator, adroit in debate, scathing in satire, master of the mot juste, was fiercely independent, a partisan unfettered by strictest ties of loyalty. Therein lies an irony: impelled by conviction and caught by circumstance, he seceded—first from party, then from country. So near to eminence, Gentry is a study in "what might have been."

Susie Gentry, Sketches from the Life of Meredith P. Gentry (1899).

Alexander H. Stephens, A Comprehensive and Popular History of the United States (1884).