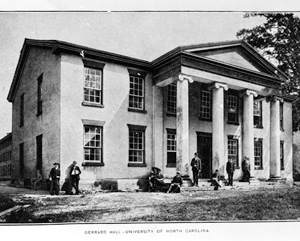 Charles Gerrard, Revolutionary patriot and philanthropist, was born in Beaufort County. Little is known of his antecedents. His mother, Dinah, was married a second time—to one Sirmon—and was living as late as 1797. Gerrard was mentioned as a brother in the will of Forbes Gerrard, probated in Beaufort County in 1786. During the American Revolution, Charles Gerrard was a lieutenant of the Fifth Regiment of the Continental line of which Edward Buncombe was colonel. After the war the rank of lieutenant entitled him to a grant of 2,560 acres, which he located at the junction of Yellow Creek and the Cumberland River not far below the present city of Nashville, Tenn. He seems to have lived on this land for some years, for in 1789 he represented Davidson County in the constitutional convention of North Carolina. A year later Davidson was included in the newly organized "Territory South of the River Ohio."

At an undetermined date Gerrard returned to North Carolina and settled in the town of Tarboro, where he went into business with Edward Hall, a prominent merchant. Gerrard had a contract with the U.S. postmaster general for carrying the mail between Louisburg, Nash Court House, and Tarboro once a week in each direction for which he was paid $46.67 quarterly. Late in life he married, in Tarboro, Elizabeth Hill, the daughter of James Hill. They had no children. His widow married Henry Hunter in 1805 and had a son, Charles Gerrard Hunter, who moved to Louisiana and married a cousin, Rosalie Barrow.

Gerrard died at the residence of General William Arrington in Nash County. His obituary in the North Carolina Journal described him as a brave and persevering soldier who "as a citizen, husband, father, friend, and neighbor was justly admired by all who knew him." The obituary further reported that he had been afflicted with dropsy (congestive heart failure) for three years before his death, and in the last year of his life had been tapped nineteen times, the quantity of water taken from him amounting to 55 gallons, 3 quarts, and 1 1/2 pints.

Gerrard's will, dated 2 Mar. 1797, was probated in Edgecombe County in August 1798. In addition to providing for his wife and other relatives, he bequeathed his sword and $25 for a ring of rememberance to his friend and executor, Thomas Blount of Tarboro; his pistols to General William Brickell, another friend; and his land in his native county of Beaufort for the benefit of the poor. The bulk of his estate, 13,000 acres of land in the state of Tennessee, was left to The University of North Carolina. This legacy stipulated that the 2,560 acres granted him for service in the army never be sold and that the remainder of the acreage be held for at least seven years. The university gradually sold off these holdings but for thirty-five years honored Gerrard's request for the 2,560 acres. In 1833, attorneys William Gaston and Edmund Badger gave the opinion that the trustees had the right to sell the service tract of land. Acting through Colonel William Polk as attorney, the university sold the 2,560 acres for $6,400. Of this sum, $2,000 was applied toward the new chapel then under construction in Chapel Hill. According to President Kemp P. Battle, it was resolved that, to show gratitude for the liberality of the donor and to perpetuate his memory, the building would be known as Gerrard Hall.

Deeds and Wills of the Counties of Beaufort and Edgecombe (North Carolina State Archives, Raleigh).

I have some updated

I have some updated information about Charles Gerrard, for which Gerrard Hall at UNC-Chapel Hill was named. How do I get that information to you.?

Thank you for being willing to share this information and for visiting NCpedia! I am forwarding your comment over to our library's Digital Team at digital.info@ncdcr.gov. They can review your information and look into making an update on the article. A staff member from our library will be in touch with you via e-mail soon!