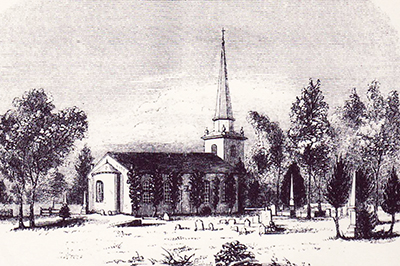 Clement Hall, Anglican missionary and author, was born in Warwickshire, England, probably in or near Coventry where he is known to have had relatives. He was baptized at St. Mary's Church, Warwick, on 29 May 1706 and educated at a public school in Warwick. By 1731, he and his brother Robert were living in Perquimans County, N.C. Their mother either accompanied them or arrived soon afterwards; she died in Edenton on 8 Feb. 1752, at age seventy-three, and was buried in St. Paul's Church. Clement Hall bought a 104-acre plantation on the northeastern side of Perquimans River in 1731 and was appointed a justice of the Perquimans County Court in 1739. He also began regular service as a lay reader for the local Anglican parish. Early in the summer of 1742, he married twenty-year-old Frances Foster, daughter of Francis Foster who had held various positions in the government of the colony since 1689. Just sixteen days later Robert Hall married Ann Leary of Chowan County.

In the summer of 1743 Clement Hall's wish to seek ordination as a missionary in the service of the Church of England was recognized when a number of prominent men in the colony signed a certificate testifying to his "Honour, Diligence and Integrity" and that he was "esteemed a true Churchman, and one of very good Repute, Life & Conversation." He was recommended to church officials in London as a suitable itinerant missionary for service in North Carolina, where there were only two such missionaries to serve over 15,000 white inhabitants. By the end of the year Hall was in London, and through the good opinion of the Bishop of London, the Right Reverend Edmund Gibson, and the Reverend Thomas Spateman, a member of the staff of St. Paul's Cathedral, he was ordained. By mid-August 1744 he sailed for home.

The vestry of Chowan Parish (St. Paul's, Edenton) found a house for Hall, and he and his family soon moved there. He began to hold services in Edenton and on a regular basis made long journeys through the northern portion of the colony. In some years he reported that he traveled over 2,000 miles, sometimes preaching to as many as 600 people at a time when services were held under large trees; on some of his trips he administered the Holy Communion to as many as 300 people on a single tour. Shortly before his death, Hall estimated that he had baptized at least 10,000 people during thirteen years of his ministry. Frequently he noted that he also had instructed Negroes and children to prepare them for baptism, churched women (conducted a service of prayers and thanksgiving for women after childbirth), visited the sick, and distributed tracts supplied by the Society for the Propagation of the Gospel in London.

At his own request, Hall in 1757 was permitted to serve St. Paul's Parish alone. By this time he was often subjected to periods of illness and was building a small house on land he had purchased near Edenton shortly before selling his plantation in Perquimans County. The house he had formerly occupied was burned in 1755, the fire consuming his books, sermons, clothes, "and necessaries to the value of £300 & upwards." This was perhaps equivalent to six years' salary. His death must have been unexpected as bills submitted to his estate included the cost of building materials for the house. Hall and his wife, who survived him, were the parents of seven daughters and two sons: Mary, Sally (or Sarah), Betsy (or Elizabeth), Ann, Deborah, Molly, Nancy, Clement, and Robert. A final accounting of his estate in 1761 revealed that over £407 had been paid out and £413 received, leaving his family a few shillings over £6, about a month's salary. 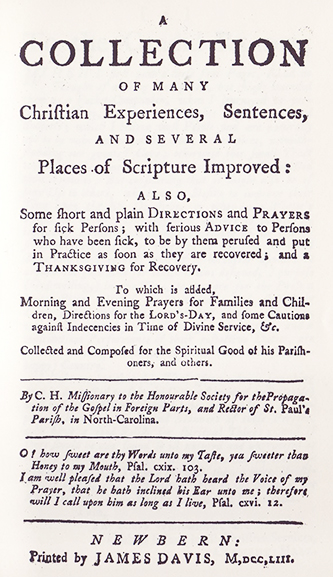 While riding horseback around the colony, Hall wrote a little 50-page book, A Collection of Many Christian Experiences, which he referred to as "a Pocket-Companion . . . to keep my Thoughts employed on good Subjects; which I believe most People find are naturally apt to be vain and wandring when we are alone, notwithstanding our greatest Care." And then, he wrote, "considering that it might also be of some Use to others, who have a Desire to improve their Time upon the like Occasions, or when on a Winter's Night or a rainy Day they have Leisure to peruse it, instead of Drinking, Gaming, or telling of an idle or slandrous Tale; I have ventured to put this my small Mite into the Treasury." The first 21 pages contain "A Miscellaneous Collection of Many Christian Experiences, &c." consisting largely of quotations or paraphrases from Ecclesiastes, Proverbs, Job, Psalms, and the New Testament books of Matthew, Luke, John, Corinthians, and Timothy. Most of the volume, however, is devoted to proverbs, many of which undoubtedly were original with Hall—"Collected and Composed . . . by C. H.," the title page reads. Others of the pithy sayings appear to be derived from Benjamin Franklin; one is from Tertullianus, another from Thomas Fuller, while a careful comparison would perhaps reveal the source of still others. With a separate title page, Hall reproduced the 11-page text of Serious Advice to Persons Who have been Sick for which he gave no author, but it actually was written by the Right Reverend Edmund Gibson, Bishop of London, who had ordained Hall. Hall's concluding contributions include a number of prayers, various forms of grace to be said before and after meals, and some prayers for children. Although some of these are clearly derived from the Book of Common Prayer, others may well have been original compositions by Hall.

Hall's Collection, printed by James Davis in New Bern in 1753, was the first nonlegal book to be written and published in the colony. Davis had established a printing press in the colony in 1749, but until the appearance of Hall's book only official material had been printed. The only known copy of the book is in the Rare Book Collection, Duke University Library, Durham.

Society for the Propagation of the Gospel Letterbooks, series B, vol. 11, document nos. 196–198 (microfilm, Division of Archives and History, Raleigh).

Hawkins, Ernest. Historical notices of the missions of the Church of England in the North American Colonies. London: B. Fellowes. 1845. 79-85. http://books.google.com/books?id=Xu9HAQAAIAAJ&pg=PA79#v=onepage&q&f=false (accessed August 8, 2013).

[title page]. Hall, Clement, and Edmund Gibson. A collection of many Christian experiences, sentences, and several places of Scripture improved. A facsimile of a North Carolina literary landmark. Raleigh: State Dept. of Archives and History. 1961.

"St. Paul's Church, Edenton, based on a drawing made in 1857 by David H. Strother."  [title page]. Hall, Clement, and Edmund Gibson. A collection of many Christian experiences, sentences, and several places of Scripture improved. A facsimile of a North Carolina literary landmark. Raleigh: State Dept. of Archives and History. 1961. Frontispiece.