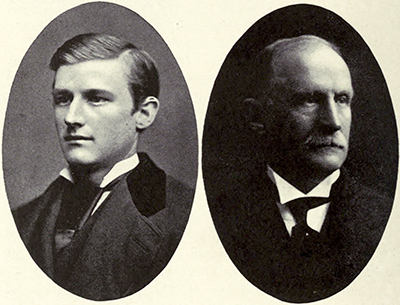 Charles Joseph Harris, businessman, was the son of William Harris, a farmer, and Zilpah Torrey Harris of Putnam, Conn. His paternal ancestor was Thomas Harris, who in 1630 sailed on the Lyon in company with Roger Williams from Bristol, England, to Salem, Mass. His brother, William Torrey Harris, was U.S. Commissioner of Education from 1889 to 1906. Harris received his early education in the schools of Putnam. In 1874, he was graduated from Yale where he was a fraternity brother of William Howard Taft, a relative with whom he corresponded until Taft's death. In 1876, Harris received the LL.B. from Washington University in St. Louis, Mo., where his brother was superintendent of schools. He then taught high school in Kansas (1876–77) and in Denver, Colo. (1877–78). After engaging in the hardware business in Denver, he built irrigation ditches in the West, from which he gained much of his wealth.

About 1888, Harris moved to Dillsboro, N.C., and from this base engaged in a variety of business enterprises. His major activity was the mining of kaolin, a clay mineral used in the manufacture of porcelain. At first associated with the Equitable Manufacturing Company which mined kaolin near Dillsboro, Harris in 1890 became secretary-treasurer and a chief stockholder of the new Carolina Clay Company with plants in Dillsboro and Webster. This company shipped large quantities of kaolin to East Liverpool, Ohio, and Trenton, N.J. Eventually he formed and became president of his own company, the Harris Kaolin Company, with operations in Jackson, Swain, Haywood, Mitchell, Yancey, and Avery counties.

With the capital acquired from his kaolin operations, Harris contributed to the economic development of western North Carolina. He was president of the Harris-Woodbury Lumber Company, which owned some 76,000 acres of timberland in what became the Great Smoky Mountains National Park. This land was sold to the Champion Paper and Fibre Company and the Norwood Lumber Company before it became part of the park. In 1903, Harris established the C. J. Harris Tannery in Sylva, the first industry of any size there, and sold it in 1916 to the Armour Leather Company. In 1907, he constructed the dam and power plant on Scotts Creek for the Dillsboro and Sylva Electric Light Company, of which he was president until 1941. A larger dam and power plant were constructed on the Tuckasegee River at Dillsboro in 1913. His involvement in banking included the presidency of the Jackson County and Spruce Pine banks, the vice-presidency of the American National Bank in Asheville, and a sizable stockholding in Wachovia Bank and Trust Company. Harris was also president of the Blue Ridge Pin Company of Dillsboro, which manufactured locust wood utility pole pins on which glass insulators were placed, and of the Harris Granite Quarries with headquarters in Salisbury. His one venture into publishing was as president of the Asheville Daily Times Company. During this period, his major economic enterprise outside North Carolina was as president of the Appalachicola Lumber Company in Florida.

In addition to business, Harris had a keen interest in politics. He attended every Republican National Convention from 1892 to 1936 and was elected a delegate-at-large in 1908, the year William Howard Taft, his kinsman, was nominated. From 1898 to 1902 he was a member of the U.S. Industrial Commission. In the early 1900s he was president of the North Carolina Republican League, and in 1904 he accepted the nomination of the Republican party for governor of North Carolina. His nomination was a strategem of his party to obtain greater support from business interests; it did not succeed, as Harris was defeated by the Democratic nominee.

Harris was also active in social organizations. He was a member of the Yale Alumni Association of North Carolina, the University and Yale clubs of New York City, the Metropolitan Club of Washington, D.C., and the Asheville and Biltmore Forest country clubs. He was an Episcopalian. His philanthropic activities included gifts to the C. J. Harris Community Hospital in Sylva and the construction of the memorial tower to Elisha Mitchell atop Mount Mitchell. Moreover, except during World War I, he traveled abroad every year from 1910 to 1935.

In June 1881, in Milwaukee, Wis., Harris married Florence Rust, the daughter of David Ward Rust, a lumberman of Saginaw, Mich. Florence bore him two sons, David Rust and Robert Ward. She died in 1918. Harris suffered a broken hip in 1938 and was confined to bed for the rest of his life; he died at his son Robert's home in Biltmore Forest and was buried in Riverside Cemetery, Asheville.

In 1916, Mr. Harris donated land in Spruce Pine, (some of his mining interest) to build a new school. As the mining industry and railroad had created a population boom in the community. Harris donated the land and asked that the new school be called the William Torrey Harris School in memory of his brother who was the first US Commissioner of Education. The name of Spruce Pine's schools has continued as Harris in some form since 1916. Harris Middle School in Spruce Pine just completed the 100th year as a school bearing the Harris name.