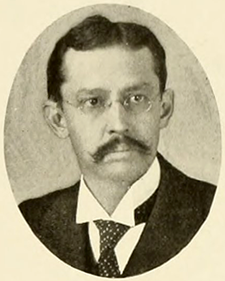 Thomas Perrin Harrison, college professor, was born in Abbeville, S.C., at the home of his maternal grandfather, Thomas Chiles Perrin. The son of Francis Eugene (1826–78) and Mary Eunice Perrin Harrison (1832–74), he spent his boyhood on his father's plantation at Andersonville, which lay at the confluence of the Tugaloo and Seneca rivers, forming the Savannah. For fifty years this was the most important river port in upper South Carolina; from it tobacco, cotton, and other products were loaded on barges for the 100-mile trip to Hamburg, S.C., and Augusta, Ga. At Andersonville he enjoyed the outdoor life of swimming, fishing, boating, and at night much storytelling. Formal schooling began in a nearby one-room schoolhouse, which he attended with an older brother and sister.

After his parents' death, at age fourteen Harrison moved to Abbeville to live with the Perrins, and for two years attended the Abbeville Academy. In 1882 he entered the South Carolina Military Academy at the Citadel (later known as the Citadel), where in 1886 he was graduated with second honors. This was the first class to enter and, four years later, to graduate after the Civil War. For two years Harrison remained at the Citadel as lieutenant, adjutant, and professor of English. Years later, in 1929, he delivered the commencement address and was awarded the honorary LL.D. degree. Of all the institutions with which he was later associated, he was proudest of the Citadel, a symbol of his lifelong pride in a military bearing.

In 1888 he faced a new and different challenge when he enrolled as a graduate student in Johns Hopkins, Baltimore, with a major in English and minors in German and French. All English majors fell under the direction of Dr. James W. Bright, the eminent pioneer in English philology based on the German school of linguistic research emphasizing historical grammar rather than literature. Harrison so mastered the rigorous program that after two years he was appointed University Scholar and later Fellow in English, the stipend of which enabled him to study in England. In May 1891, he was awarded the Ph.D.; his dissertation was entitled "The Separable Prefixes in Anglo-Saxon." The value of the exacting discipline at Johns Hopkins is undeniable, though, like most of his contemporaries there, he turned with relief to the teaching of literature. Not surprisingly, the optimist Robert Browning became a favorite poet.

The fall of 1891 found Harrison at Clemson College as associate professor, a post he held for four years. On 9 Jan. 1894 he married Adelia Lake Leftwich, in Atlanta, to whom he had become engaged before leaving Baltimore; she was the daughter of the Reverend James Turner Leftwich, pastor of the First Presbyterian Church.

Harrison's move to Davidson College in 1895 marked the beginning of a contented and successful period of teaching in a congenial community. With a balanced curriculum leading to the liberal arts degree and an atmosphere inspired by the Presbyterian church, Davidson has maintained the highest ideal in education since its establishment in 1837. Fortunate in sharing this aim, Harrison remained at the school for thirteen years. At midyear 1908–9, he resigned to accept a professorship at the College of Agriculture and Mechanic Arts (later called the College of Agriculture and Engineering, then State College of Agriculture and Engineering) in Raleigh. Here he adapted his talents towards a utilitarian end. In 1911 he was appointed dean of the college, a position he held until his retirement as Dean Emeritus in 1939. For several years he also taught summer school at The University of North Carolina.

During World War I he did not meet the physical requirements for active military service, but in July 1918 he embarked for France as YMCA secretary. After the armistice he continued as a member of the Army Educational Corps, American Expeditionary Force, until July 1919.

Soon after his return to State College, Harrison was instrumental in establishing the West Raleigh Presbyterian Church; for many years he served as elder. At his suggestion, in 1927 Dr. Ben R. Lacy, a Davidson alumnus, was the first to address the small congregation; later that year Lacy was succeeded by the Reverend Joseph R. Walker as regular minister. Harrison was a member, and occasional speaker, of the National Council of Teachers of English, North Carolina State Teachers Assembly, National History Club, North Carolina Literary and Historical Association, Society for the Promotion of Engineering Education, Folklore Association, and Modern Language Association of America. Scholarly articles by him appeared in Modern Language Notes (1920, 1943) and Shakespeare Association Bulletin (1945).

Harrison and his family spent every summer in the North Carolina mountains, staying first in boarding-houses and later in the Ravenel home in Biltmore. He and his sons made frequent backpacking trips to the Craggies, Mount Mitchell, and lesser peaks. In 1925 he acquired an old farmhouse on 130 acres at the foot of Whiteside Mountain, near Cashiers. For him, the simple life here was reminiscent of his plantation boyhood. Cashiers became the scene of perennial reunions of his own scattering family as well as of many South Carolina kin.

On his retirement from State College at age seventy-five, Harrison remained mentally and physically active. His daily routine still included early morning calisthenics and jogging through the pines behind his Raleigh home in late afternoon, followed by a cold bath. He made almost a fetish of physical fitness and he never suffered a serious illness. After his wife's death in 1944, he spent his last years at his daughter's home in Asheville. He died during an operation to mend a broken hip. According to his wish, he was buried beside his parents in the family cemetery in Andersonville, S.C. Harrison was survived by four children: James Leftwich, Thomas Perrin, Jr., Florence Leftwich, and Lewis Wardlaw.