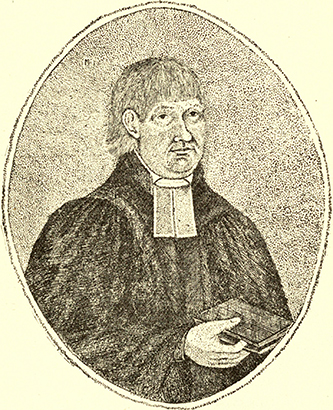 Paul Henkel, Lutheran pastor, missionary, and organizer on the American frontier, was born on Dutchman's Creek in present Davie County, the oldest son of Jacob and Mary Barbara Dieter Henkel, who had just moved to the North Carolina frontier on the eve of the French and Indian War. When the Cherokees overran that section in 1760, Jacob Henkel, like so many of his neighbors in the Forks of the Yadkin, went back to Virginia, settling in what is now Pendleton County, W. Va., on the headwaters of the South Fork of the Potomac River.

It was there that Paul Henkel was reared and that he married Elizabeth Negeley on 20 Nov. 1776. He was trained for the cooper's trade but preached his first sermon in 1781. Encouraged by the Reverend John Andrew Krug of Frederick, Md., he studied Latin, Greek, and theology with the Reverend Christian Streit at Winchester, Va. He was licensed to preach in 1783 and ordained in Philadelphia on 6 June 1792 by the Ministerium of Pennsylvania. It is not surprising that Henkel should turn to the ministry. His father's grandfather, the Reverend Anthony Jacob Henckel, after twenty-five years of service in Germany, had been one of the first Lutheran ministers to emigrate to America, settling in Pennsylvania with his family about 1718.

In 1790 Paul Henkel moved to New Market on the North Fork of the Shenandoah River in Virginia, which from then until his death was—with three exceptions—his base of operations. In 1800 he arrived in North Carolina for a five-year stay, and twice he went to Point Pleasant at the confluence of the Great Kanawha and Ohio rivers in present-day West Virginia. But he called New Market home.

Before settling at New Market, Henkel was in North Carolina. The church on Dutchman's Creek in Davie County, in the same section where he was born, lists him as pastor from 1785 to 1789. His diary, begun in 1790, makes numerous references to his ministry in North Carolina during those years, but they are vague and do not indicate how far his work extended. In 1800 he was called from New Market by several churches in Rowan and Stokes (now Davie, Davidson, and Forsyth) counties, N. C. Besides his old church at Dutchman's Creek, those listing him as their pastor are Bethany, Pilgrim, and St. Luke's in Davidson County and Nazareth and Shiloh in Forsyth. He was given a home south of the Moravian town of Salem in a community the Moravians referred to as "Opossum Town, where Pastor Henkel lived."

His five years there coincided with the Great Revival that began in Piedmont North Carolina in 1801, and he wrote copiously about it in his diary. Whereas some of the other Lutheran pastors were inclined to go along with the revivalists, Henkel spoke out against their emotional excesses. He even went so far as to debate the matter with the Reverend James Hall, the eminent Presbyterian divine, at the big camp meeting at Shepherds Cross Roads in the southern part of Iredell County in 1802. Later, however, he admitted that the revivals had brought the North Carolina churches closer together when acting in an official capacity.

In March 1803, Henkel met at Pine Church near Salisbury with three other Lutheran pastors and fourteen lay delegates to organize the North Carolina Synod of the Lutheran church. The other pastors were J. C. Arends, dean of North Carolina Lutherans, Carl A. Storch, and Robert Johnstone Miller, but there is evidence that Henkel was the moving force. In his relationship with the other pastors he increasingly assumed a supervisory role, preaching for Arends west of the Catawba so often that several churches there listed him as one of their pastors. Moreover, he brought his son Philip to Guilford and was supervising his work there, and arranged for his brother John to go to Cabarrus County as pastor. (John Henkel died before he could reach his new field.) Even after leaving North Carolina, Paul Henkel considered himself a member of the North Carolina Synod and either met with it or reported to it until the organization of the Tennessee Synod in 1820. During those years, he was often back in the state, visiting his sons, attending the synod, or taking orders for books or delivering them. His impact on the Lutheran church in North Carolina cannot be limited to the five years he spent near Salem.

In the years following his departure from his pastorate near Salem, Henkel was appointed annually as a missionary to the frontier by the Ministerium of Pennsylvania, especially to the Ohio region; later, the ministerium permitted Henkel to go where he chose. As he covered the frontier from South Carolina to Ohio, preaching in German and English, he tried to persuade the Germans to retain their language and religious background, and insisted on loyalty to an unaltered Augsburg Confession. Where he could locate them, he organized Germans into congregations and attempted to find pastors for them.

In many ways, Paul Henkel was to the Lutheran church of the frontier what Francis Asbury was to the Methodist church. There was, however, one major difference. Asbury passed up marriage rather than be encumbered with a wife on his journeys. Henkel frequently took his wife Elizabeth with him, riding in a chaise or wagon instead of on horseback. Often his entering a new field of work depended on her decision, as when they came to North Carolina in 1800. Asbury left no descendants to carry on his work. Henkel founded a dynasty, with five of his six sons ordained Lutheran ministers. It is far more appropriate to speak of the Henkels than just Paul Henkel.

At New Market the Henkels founded the first Lutheran publishing house in America. Paul Henkel had felt one was needed in order to furnish congregations with copies of the Augsburg Confession. Solomon, his oldest son, a pharmacist and doctor who had settled in New Market, bought a printing press in 1806, and Ambrose, his third son, learned the printing trade and ran the Henkel Press. As long as he lived, Paul Henkel contributed to it, editing the Augsburg Confession, catechisms, and hymn books in English and German, and translating the German hymns into English. His diary also mentions an "ABC Book" on which he was working.

Ambrose Henkel, who was ordained a Lutheran minister by the Tennessee Synod, gradually took over his father's work around New Market. Sons Andrew and Charles became Lutheran ministers in Ohio. Two other sons, Philip and David, carried on the Henkel ministry in North Carolina. Philip, who went to Guilford County when his father arrived in the state in 1800, moved to Lincoln County about the time Paul Henkel returned to New Market, and most of his work was in that area.

In 1813 Philip was joined by his eighteen-year-old brother, David. The North Carolina Synod licensed David to preach, but with some hesitancy because of his youth. Strong-willed and brilliant, David Henkel found himself in conflict with others in the synod, especially Gottlieb Shober, a Moravian minister who was supplying a Lutheran charge. The disagreement came to a head in 1820, when a meeting of the synod was called two weeks early to choose a delegate to a proposed General Synod. The Henkels and one other minister met at the appointed time and decided to withdraw from the North Carolina Synod and form the Tennessee Synod. Paul Henkel was absent when the split occurred but was present at the organization of the new synod in Tennessee later that summer. It was the third time he had participated in the creation of a Lutheran synod on the frontier; in 1818 he had helped establish the Joint Synod of Ohio.

Paul Henkel did not live many years after the Tennessee Synod was organized. In 1823 he suffered a stroke which slowed him down; two years later he was stricken a second time and died within ten days. He was buried first at Davidsburg Church, but following his wife's death in 1843 they were both reinterred in the cemetery of Emmanuel Church, New Market.