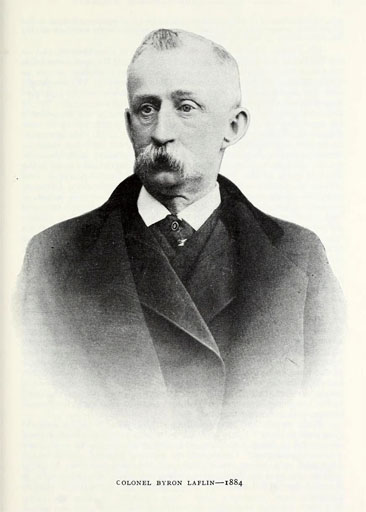 Byron Laflin, manufacturer, army officer, and legislator, was born in Lee, Mass., the son of Sophronia Sylvester and Walter Laflin. He was the third of four children; the oldest, Addison Henry, was a New York congressman from 1865 to 1871. Laflin's maternal grandparents were Polly King and George Hall Sylvester of Massachusetts. His paternal grandparents were Lydia Rising and Matthew Laflin of Smithwick, Mass. Byron Laflin's father, a gunpowder and paper manufacturer and a merchant active in the public affairs of Lee, served as a state representative in 1833 and 1834. Little is known of Byron's early life or education. In 1849 his brother Addison purchased a paper mill in Herkimer, N.Y., and Byron helped to manage it. In 1854 Byron served as a warden of Christ Episcopal Church in Herkimer and aided in the purchase of land and construction of a building for the thirteen communicants. In 1861 and 1864 he served as president of the village of Herkimer.

Laflin rendered his most notable public service during the Civil War as an officer in the Thirty-fourth New York Volunteer Regiment of Infantry. When the six companies of Herkimer County were mustered into service for two years on 8 May 1861, at Albany, Laflin was commissioned a major in the regiment. After serving picket duty in Maryland and Virginia from July 1861 to April 1862, the regiment saw sharp action in the Peninsular campaign at Fair Oaks, the Seven Days' Battle, and Malvern Hill. In September 1862, after twelve days of steady marching, the regiment fought at Antietam and narrowly escaped destruction on an exposed flank. After fighting at Fredericksburg in 1863, the regiment was mustered out of service. It had lost nearly half of its men in two years. Meanwhile, Laflin had been appointed lieutenant colonel on 20 Mar. 1862. On his promotion to colonel on 22 Jan. 1863, he assumed command of the regiment until he was mustered out on 30 June. Briefly at Fredericksburg, he commanded a brigade. For his able leadership and gallant conduct in the field, he was breveted brigadier general of volunteers on 13 Mar. 1865.

Laflin's move to North Carolina was fortuitous. After the Herkimer paper mill went bankrupt in 1865, he accepted a position in the U.S. Army as provost marshal of Virginia. One day Davis Jefferson Rich, a fellow officer from the Thirty-fourth New York, happened into his office in Richmond and expressed a desire for a position or a business. Laflin suggested that Rich go to North Carolina and purchase a plantation for $20,000 or less, and Laflin would buy half interest in it. Following his advice, Rich bought land in Pitt County. When the enemies of President Andrew Johnson said he had "commenced to raise hell," probably in mid-1866, Laflin became disgruntled with national politics and joined Rich in North Carolina. The two men proceeded to help build the Republican party in Pitt County.

Laflin's venture into Tar Heel politics earned him a reputation for venality. As a member of the constitutional convention of 1868, he reputedly received part of $2,500 from General L. G. Estes for his "vote and influence" in securing the passage of an ordinance for the issuance of $1 million in bonds for the Wilmington, Charlotte, and Rutherfordton Railroad. From 1868 to 1871, Laflin served in the legislature as chairman of the house committee on internal improvements, which acted on all railroad legislation. Members of the corrupt "Ring" that was engaged in the misuse of railroad bonds testified that they paid Laflin $785 on one occasion and $20,000 on another for his help in obtaining railroad bond issues. They also let Laflin use the bonds as a margin for speculation in the bond market. Although a legislative committee uncovered these indictable offenses, there is no record of Laflin's indictment or any indication that he amassed a fortune.

His business ventures in North Carolina did not prosper. After Davis J. Rich died in February 1869, Laflin continued the plantation and also entered banking. His financial affairs declined after the panic of 1869, and he was ruined financially when he left North Carolina for Norfolk, Va., in 1871. In Norfolk, he worked briefly for one of his former company commanders, William L. Oswald, who had built up a prosperous steamship line. But soon Oswald died and Laflin moved to Hudson, N.Y., where he lived out his life as an invalid and a pensioner.

It is unfortunate that most assessments of Laflin's character came from his political opponents. Jonathan Worth called him a "miserable carpet bag fop without property or intelligence and no sympathy with us." According to the Raleigh Sentinel, which dubbed him "Laughing Laflin," he was "cynical and dissipated," a "man at loose ends, careless, contemptuous and dissolute," and "the big dog of the concern who lays about loose in the city of Raleigh, laughs, loves, and drinks whiskey." The Sentinel also described him as having a "splendid mind" and "an eye among the best and most beaming that was ever set in the head of man."

Laflin's negative qualities are perhaps related to an element of tragedy in his personal life after the war. The evidence indicates that by 1866 Laflin and Fannie Caswell, of Herkimer, his wife of thirteen years and the mother of his four children, were separated. She died on 24 Nov. 1867, at age thirty-four, in Pittsfield, Mass. Her youngest child and namesake died on 18 July 1869 at age three. Apparently none of Laflin's children lived with him after his wife's death. Ada, born in 1854, married Chester Mitchell Dawes in 1881 and moved to Chicago. Dawes was the son of U.S. Senator Henry Laurens Dawes of Massachusetts. Eliza, born in 1858, never married; she lived in Watertown, N.Y. Byron Laflin died in Hudson, N.Y., and was buried in the family plot at Herkimer.

F. B. Heitman, Historical Register and Dictionary of the United States Army, 2 vols. (1965).