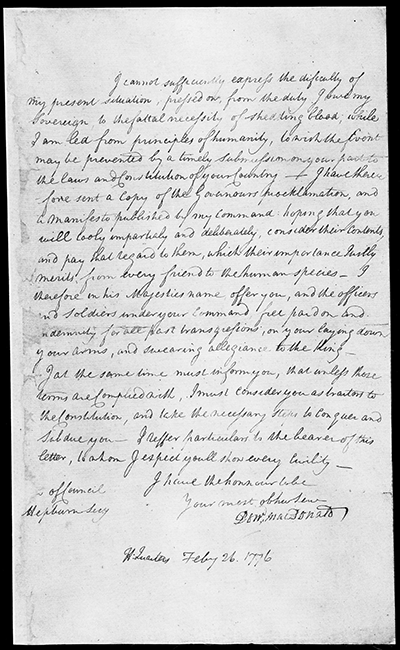 Donald MacDonald, veteran of the battles of Culloden and Bunker Hill, was the most significant Scottish Highlander to serve the king's cause in North Carolina during the Revolutionary War. Early in the war he went to Massachusetts, where as a lieutenant colonel he fought in (and was wounded at) the Battle of Bunker Hill. Soon afterwards he was sent to North Carolina by General Thomas Gage (then in overall command of the British troops in America) to recruit troops for a Royal Highland Emigrant Regiment. MacDonald, accompanied by his nephew by marriage, Captain Donald McLeod, arrived at New Bern in July 1775 and was able to convince the town's Committee of Public Safety that the two had come to recover from wounds suffered at Bunker Hill and to visit relatives.

Immediately, MacDonald was authorized by Governor Josiah Martin to enlist troops from among the Scottish Highlanders of the Upper Cape Fear. These recent immigrants (some as late as 1775)—their vast clan holdings having been broken up back in Scotland following the Battle of Culloden, thus encouraging a number of them to migrate to America—had received rather generous land grants from Martin and in turn readily renewed their oaths of allegiance to the Crown. Consequently, the governor was counting heavily on their support to reestablish his power over the rebellious planters along the coast. Prior to MacDonald's arrival, agents of General Gage had succeeded in enlisting 800 of the Highlanders (mainly from among the most recent immigrants) in the king's cause; however, the local Patriots had been able to prevent the agents from carrying out their orders. While MacDonald (now appointed by Martin brigadier general of militia "for the time being") was enlisting the services of the Scottish Highlanders around Cross Creek (now Fayetteville), McLeod (now commissioned lieutenant colonel and second in command) journeyed into the backcountry to arouse the former Regulators to the royal colors. McLeod met with little success—only 130 men joined the cause. But MacDonald's task proved to be much easier. The thrifty Scots, most of whom were too new in the country to feel any attachment to the rebel cause, were quick to take full advantage of the British inducements for enlistment—two hundred acres of land, the same pay as regular troops with liberal compensation for the use of their equipment such as horses and wagons, and the assurance that they would not have to fight outside the colony.

Martin's plans called for the Highlanders and the Regulators to march to Brunswick for a rendezvous on 15 February with an expedition under Sir Henry Clinton and Sir Peter Parker then on its way south. Together, these forces would crush the rebels in the colony. However, such a grandiose plan was not to be. MacDonald was unable to bring together all his forces at Cross Creek until after the specified time for the rendezvous. Finally, on 18 February he assembled about 1,500 Scots and Regulators four miles below Cross Creek. In the meantime, the Patriots had become aware of the danger developing at Cross Creek. Accordingly, the Committees of Public Safety at both Wilmington and New Bern ordered out their militia and minutemen. By mid-February James Moore, colonel of the First North Carolina Regiment from the Wilmington District, had set up camp at Rockfish, seven miles below Cross Creek, which by the eighteenth (with recent additions) numbered about 1,100. An odd exchange of communications ensued from the two camps. MacDonald sent Moore a copy of Martin's proclamation of 10 Jan. 1776 commanding "all His Majesty's faithful subjects" to rally to the king's cause and condemning those who would not do so, inviting the Patriots "to join the royal standard." Moore countered with a copy of the Patriots' Test Oath which, if MacDonald's men would sign it, would entitle them to join the Continental army. Neither side would concede.

What followed was a series of small-scale movements, complicated by the necessity of crossing several streams, with the Loyalists trying to get through to the coast and the Patriots trying to stop them. Moore decided to make an all-out effort to stop MacDonald's forces at Moore's Creek, the last stream before Wilmington. Accordingly, he dispatched Alexander Lillington and the Wilmington battalion of 150 minutemen to join Richard Caswell from New Bern with about 800 men. Caswell and Lillington decided to remove the planks from the bridge across the creek (leaving only the log stringers) and to construct breastworks a short distance from the east bank of the creek. This time the Loyalists decided not to bypass their opponents but to meet them head-on. But this was not the position of MacDonald. An elderly man and near collapse from exhaustion, he was in no position to direct the attack; besides, as a regular officer in the British army, he was more interested in delivering the troops to Clinton than he was in subduing the rebels for the immediate moment. Also, he felt he was outnumbered and half of his group was without firearms. However, in the council of war that was held, the younger Scottish officers prevailed, and the attack was set for dawn on 27 February.

MacDonald, now quite ill, assigned the command to McLeod. Arriving at Moore's Creek from their camp some distance from the west bank and finding the bridge almost impassable, the Loyalists nevertheless attacked. A picked company of 80 Scots under John Campbell led the van, to be followed by McLeod and the main force. Campbell, McLeod, and some others actually got across the bridge, to be killed later; many were killed before they got that far. With the Loyalists in retreat, the Patriots left the entrenchments and ran to the creek, where they quickly relaid the planks and chased the Loyalists, capturing Donald MacDonald, his brother Allan, several other officers, and about 850 soldiers, along with the spoils of the wagon train—about 800 rifles and muskets and 150 swords. In the battle at the bridge, which lasted only a few minutes, only two Patriots were wounded, one of whom, John Grady of Duplin County, died four days later.

As to its import, the Battle of Moore's Creek Bridge would inspire the Halifax Resolves on 12 Apr. 1776 (the first declaration of independence in any colony) and be a major factor in the Declaration of Independence on 4 July in Philadelphia. Also Moore's Creek, joined with the British defeat in June at Charles Town, would forestall a British offensive in the South for two and one-half years.

MacDonald, on his capture, was taken to the Patriot camp where he tendered his sword to Colonel Moore (who had arrived at Moore's Creek after the battle to assume overall command), his way of insisting on a formal surrender. Moore returned the sword (according to the custom of the day), assuring MacDonald that he would be well treated as a prisoner. MacDonald and the other Loyalist officers—the regular soldiers captured were paroled and allowed to return to their homes on the oaths not to take up arms against the Patriot cause in the future—were conveyed to Halifax jail via New Bern. From there he was moved to Philadelphia, where he was kept in close confinement for several months. Finally, in the fall of 1776, he was exchanged along with General Richard Prescott for the American generals John Sullivan and Lord Stirling, William Alexander. Apparently, MacDonald remained in North America with the British forces in the United States or in Nova Scotia for the remainder of the Revolution. In 1784 he was in London.

Robert C. DeMond, The Loyalists in North Carolina during the Revolution (1940).

Lorenzo Sabine, Biographical Sketches of Loyalists in the American Revolution, vols. 1–2 (1864), and The American Loyalists (1847).

MacDonald, Donald. "An Address to the Whigs the day before the battle of Moore's Creek Bridge" (call no. N_2006_8_113). State Archives of North Carolina.

This is amazing to see all

This is amazing to see all the records! Donald is actually my great grandad! If you know anything more about him I would love to know as I only met him briefly before he passed

My 4th G Grandfather was Capt

My 4th G Grandfather was Capt John Martin. He was a Loyalist at Moores Creek Bridge battle, and was captured there. are there ant records of paroling those captured there?

I am referrring by email to reference librarians at the N.C. Governmen & Heritage Library.  A librarian will contact you shortly to help you with this question.