Watson Smith Rankin, physician and foundation executive, was born on a farm near Mooresville. He was the son of John Alexander and Minnie Isabella McCorkle Rankin, who had at least five sons and three daughters. Young Rankin attended the high schools of Mooresville and Statesville and for two years the North Carolina Medical College at Davidson College. After receiving his M.D. degree from the University of Maryland, he did postgraduate work at the Johns Hopkins Medical School for one year. He was a resident in obstetrics at the hospital of the University of Maryland and in pathology at the University Hospital in Baltimore. 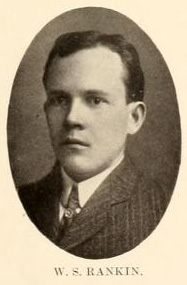 In 1903 Rankin became a professor in the School of Medicine established at Wake Forest College that year, and from 1905 to 1909 he was dean of the school. In 1909 he became the first full-time health officer in North Carolina and served in that capacity for sixteen years. Under his administration the State Board of Health became a model for other states. Because hookworm disease and malaria were so prevalent in the state, he made special studies to determine how to eradicate them. Rankin became widely known as the buggy-riding, top-hatted inspector of privies. In 1905 he went to Panama and learned Dr. Henry Carter's methods of mosquito control; the application of those methods caused a rapid decline in the incidence of malaria in North Carolina. On receiving the annual distinguished citizenship award from the North Carolina Citizens Association in 1956, Rankin was called "an evangelist of better health." The W. S. Rankin Health Center of Charlotte and Mecklenburg County was dedicated on his eighty-first birthday (18 Jan. 1960). A ward in the Duke hospital also bears his name.

Rankin was a strong supporter of the establishment of a full-fledged medical school in the state and a crusader for the development of community hospitals. He felt that the principal way to improve health care and alleviate the shortage of doctors in North Carolina, particularly in rural areas, was to increase and improve its hospitals. Until 1924, many of the hospitals in the Carolinas had been established and maintained by surgeons. Rankin thought that the counties and the state as well as private philanthropy should contribute to their establishment and maintenance. His views on health care no doubt influenced James B. Duke to incorporate into the trust indenture of the Duke Endowment provision for the support of nonprofit hospitals in the Carolinas. After his appointment in 1925 as one of the original trustees of the Duke Endowment and director of its Hospital and Orphan sections, Rankin persuaded communities with the help of the endowment to buy private hospitals and maintain them as community responsibilities. When he retired from the directorship of the Hospital and Orphan sections in 1950, his report for the previous year showed that 130 hospitals in North Carolina and 52 in South Carolina were receiving Duke Endowment funds for operation and capital purposes. The Orphan Section was providing assistance to 40 child-caring institutions—27 in North Carolina and 13 in South Carolina.

For thirty-one years Rankin served as chairman of the Duke Endowment Trustees' Committee on Hospitals and Child Care, and he remained a trustee emeritus until he died. He was one of the first promoters of hospitalization insurance in North Carolina. His writings and addresses on medical and health subjects were numerous, and he also wrote and spoke about other subjects, particularly religion and philosophy.

Rankin was a member and an officer of a number of medical and health organizations and a trustee of the American Hospital Association (1935–39). In recognition of his contributions to health and child care, he was awarded the honorary doctor of science degree by Duke, Davidson, Wake Forest, and The University of North Carolina.

On 14 Aug. 1906 Rankin married Elva Margaret Dickson of Wake Forest, and they had one son, Jesse Dickson. Mrs. Rankin died in 1951, and in 1964 Rankin married the former Mrs. Leila Jeffries, who survived him.

Rankin was a member of Omicron Delta Kappa and Alpha Omega Alpha fraternities, and an honorary member of Phi Beta Kappa. He was a Rotarian, a Democrat, and a Baptist. His funeral was held in the Myers Park Baptist Church, of which he was a founder. He was buried in Evergreen Cemetery, Charlotte. His portrait hangs in the library of Duke University.