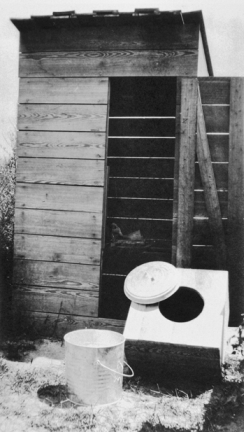 Privies—also known as latrines, loos, johns, outhouses, ajaxes, toilets, or necessaries—were typically small, separate structures associated with a larger domestic, commercial, or industrial building. Although the privy's function has remained constant as a receptacle for human waste, its location, specific architecture, and subsequent furnishings vary. Archaeologically, at least six historic sites have been identified with privy features. One early privy associated with the second jail in historic Halifax was excavated in 1970. Built between 1759 and 1762, this brick-lined privy pit measured six by eight feet and was almost three feet deep. It likely served as the latrine for colonial prisoners as well as visitors to the town and courthouse. At a private residence in historic Edenton, two privies were excavated in the rear yard. Both pits were lined with hewn timbers at the bottom and bricks at the top; they were filled with domestic-related trash from the late eighteenth and early nineteenth century. A third site located in Old Salem provided evidence of an early tub or barrel privy typically associated with a Piedmont house. This privy, also filled with old domestic trash, was once attached to the side of a barn located in the rear yard. At the E. A. Poe House in Fayetteville, archaeologists uncovered the circular pits of five backyard privies.

Many extant privies from the eighteenth and nineteenth centuries are associated with individual houses, but others have been discovered on the sites of a schoolhouse, hunt clubs, commercial properties, churches, and a large camp meeting ground. The latter, located in Lincoln County, was described as having 288 individual family cabins, each with its own privy. The school had two privies, one for women and one for men. Examples of early privies also exist at plantation or historically significant sites such as the James Iredell House in Edenton and Bellamy Mansion in Wilmington.

North Carolina privies began to be regulated by the State Board of Health beginning in 1877. Primary issues of concern included the safety of drinking water, disease prevention, control of infectious diseases, and proper water and sewage disposal. By 1879 more than half of the state's counties had organized health boards addressing these issues. 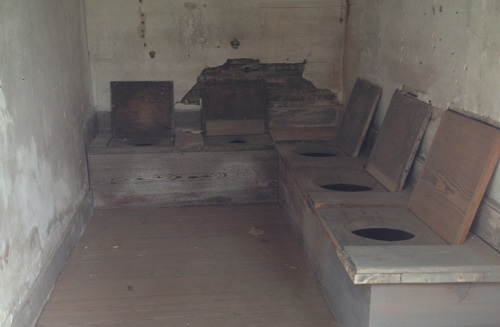 By the late 1920s, advancements in sanitary engineering fostered construction and installation of underground sewage disposal. Indoor plumbing and flush toilets replaced outdoor privies in most areas, but wooden privies remain a feature of the rural landscape. A 1996 newspaper article revealed that 3.4 percent of Chatham County residences lacked modern toilets, and nearly 50,000 homes within the greater Triangle area (Raleigh, Durham, and Chapel Hill) lacked indoor plumbing. The author cited building code restrictions and the inability to equip houses with piping or appliances as primary reasons for this deficiency.

"Sampson County privy (showing a new seat before it was installed), ca. 1915." Photograph. Courtesy of North Carolina Office of Archives and History, Raleigh.

"Licensed Privy, ca. 1893: Local legend maintains that when the town of Advance incorporated in 1893, the state required that all privies be inspected. A successful inspection resulted in a license being posted above the privy door proving it met proper standards." Available from Davie County Public Library via DigitalNC. http://library.digitalnc.org/cdm/ref/collection/ncimages/id/3397 (accessed July 23, 2012).