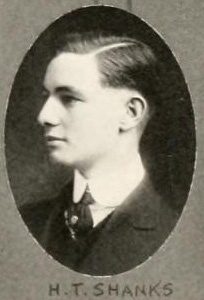 Shanks began his teaching career at South Georgia State Woman's College, Valdosta, where he was professor of history and political science from 1920 to 1922. From 1923 to 1929 he was an instructor in history at The University of North Carolina; he also taught at East Carolina Teachers' College (summer 1923) and Wake Forest College (summer 1927). In 1930 he joined the faculty of Birmingham-Southern College, Alabama, where he taught history for thirty years, fifteen of which he held the position of dean. In the summer of 1930 and 1931 he taught at West Virginia University, and in the summers of 1934, 1935, 1937, and 1939 he taught at Emory University. In 1958 he retired as dean at Birmingham-Southern and returned to full-time teaching as head of the Department of History. "Modest but strongly principled, genial but exacting in standards," scholarly and dedicated, Shanks inspired students to strive to attain his level of academic quality. Some of these were not young college students, for Shanks directed many night study groups, especially in Civil War history.

His dissertation, The Secession Movement in Virginia, 1847–1861, was published in 1934. In 1935–36 he received a grant-in-aid from the Social Science Research Council and a General Education Board Fellowship while working on the papers of Willie Person Mangum. Selected to edit the Mangum papers, he spent several years on the project; the first volume was published in 1950 and the fifth and last, in 1956. He also was the author of numerous articles and book reviews in scholarly and church journals.

On 31 Aug. 1929 he married Anne Graham, and they had one son, Alexander Graham. Henry Shanks was buried in Chapel Hill. The Henry Shanks Memorial Collection in American History at the M. Paul Phillips Library of Birmingham-Southern College was established in commemoration of his three decades of unstinting service to the school.

Birmingham-Southern College, "Campus and Community," Bulletin 53 (January 1960), and materials on file in the office of the president.