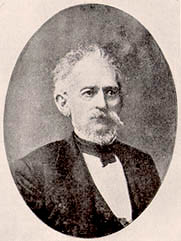 Ashbel Smith, Salisbury physician and Texas political leader, was born in Hartford, Conn., the son of Phoebe Adams and Moses Smith, Jr. He had a half brother, Curtis, and three siblings, Henry Grattan, Caroline, and George Alfred. Ashbel Smith grew up in New England and was graduated with honors from Yale University in 1824. Afterwards he was induced by Charles Fisher of Salisbury to teach in the Salisbury Academy for a salary of $300 the first year plus his traveling expenses and board. His knowledge of the classics gained for him a wide reputation, and his Fourth of July oration in 1825 was published in Salisbury and Hartford newspapers, which both praised his erudition.

During his first eighteen months in Salisbury, Smith formed many lifelong friends, among them Burton Craige, John Beard, J. J. Bruner, James Huie, and Jefferson Jones, but it was Charles Fisher who had the greatest influence on his life. Fisher was not only Smith's closest friend but his political mentor as well. Under Fisher's guidance, Smith began to read law but gave it up in 1826 to return north to study medicine at Yale. He took back with him two Salisbury boys, Archibald Henderson and Warren Huie, whom he tutored for Yale.

After obtaining a medical degree in 1828, Smith practiced in Salisbury for three years. In 1831 he left for Paris, France, for additional study. There he met and enjoyed many leisure hours with the Marquis de Lafayette, Samuel Morse, and James Fenimore Cooper. After working during an epidemic of Asiatic cholera, he published in New York in 1832 a brochure entitled The Cholera Spasmodica As Observed in Paris in 1832.

In June 1832 the Western Carolinian of Salisbury, N.C., announced that Dr. Ashbel Smith would resume the practice of medicine at his old office on Main Street. In 1833 Smith was visited by Henry Barnard, a New Englander, who reported that the physician "has quite a very large practice, which brings him in 1500 to 2000 [dollars] a year, and he is growing every day into public confidence. I have no hesitation to say, that he is better read in his profession than 2/3 of the Doctors of our country." Barnard added that "His conversation is a perpetual feast. He is a splendid scholar—spent a year in Paris and has read the great books of life and human nature with a keen eye. He understands woman thoroughly." With his knowledge of "woman," Smith had a romance with Mary Louisa Phifer of Cabarrus County and was a close friend of Warren Huie's sister, Antoinette. He was also appointed a magistrate for Rowan County and in that capacity frequently performed marriage ceremonies. In 1835–36 he was part owner with Joseph W. Hampton of the Western Carolinian. Under Smith and Hampton, the newspaper continued to be a democratic organ and a "good Jackson paper."

The allure of Texas drew the young doctor at the end of 1836, and the next year he was appointed surgeon general of the Texas army. Later he served with distinction in the Mexican War. Following the peace he settled on his plantation, Evergreen, on Galveston Bay. In 1851 Smith was appointed commissioner for the United States to the London Industrial Exposition, where he acted as a juror. He served in the Texas legislature in 1855, 1866, and 1878. During the Civil War he joined the Confederate army, becoming captain of the Bayland Guards and later colonel of the Second Texas Infantry. He was seriously wounded in the Battle of Shiloh, fought all through the siege of Vicksburg, and commanded the defense of Galveston. After the surrender, as a commissioner to New Orleans, he participated in drawing up the terms of surrender of the district.

In his later years his chief labor was the writing of several historical and scientific treatises, including a paper on yellow fever. As president of the first board of regents of the University of Texas, Smith was instrumental in selecting the institution's first faculty. He also helped establish Texas A&M College, Prairie View, Sam Houston State University, Stuart Female Seminary at Austin, and Galveston Medical School, as well as public schools at Evergreen and throughout the state. He served as a juror at the Philadelphia Centennial in 1876 and as honorary commissioner from Texas to the International Industrial Exposition at Paris in 1878.

Smith never married. He died in his eighty-first year at his home near Galveston. His body was taken to the capitol at Austin, where it lay in state before burial in the state cemetery.

A Guide to the Ashbel Smith Papers. Dolph Briscoe Center for American History, The University of Texas at Austin. http://www.lib.utexas.edu/taro/utcah/00362/cah-00362.html (accessed November 1, 2013).