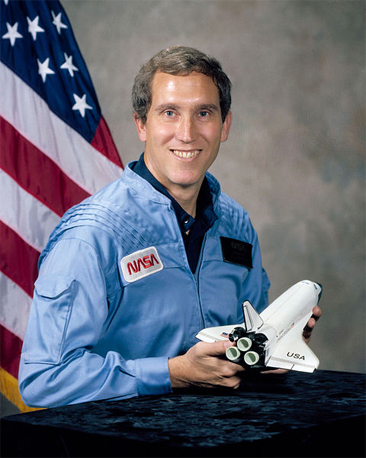 Michael John Smith, naval officer, test pilot, and astronaut, was born in Beaufort, the son of Robert Lewis and Lucille S. Smith. He was graduated from Carteret County High School, where he played baseball, basketball, and football, was voted the most outstanding student, and was president of the student council. Smith grew up on a chicken farm across the road from the local airport and spent much of his childhood watching airplanes, making models, and finally taking flying lessons. He received a student pilot license at age sixteen and flew an airplane before he was licensed to drive an automobile. In June 1963 he entered the U.S. Naval Academy. Following graduation in 1967, when he ranked 108 in a class of 893, he entered the Naval Post-graduate School in Monterey, Calif., and earned a master's degree. Afterwards he had flight training at Pensacola, Fla., and advanced jet flight training at Kingsville, Tex. During the Vietnam War he flew navy attack planes from the aircraft carrier Kitty Hawk.

Returning to the United States he was stationed at the Patuxent River Naval Air Test Center, in Maryland, where he was involved with guidance systems for cruise missiles and also taught. "By then," the New York Times observed, "he had learned the code of the warrior, stoically accepting risks that would overwhelm others." Promoted to lieutenant commander in 1977, Smith was assigned to the Naval Air Station at Oceana, Va., where he was in charge of maintenance and operations with an attack squadron. Three years later he was tapped by the National Aeronautics and Space Administration for astronaut training. He had already been selected to command an A-6 squadron and found it difficult to leave the navy for so different an assignment. An opportunity to spend more time with his family was one factor that persuaded him to accept the new challenge.

Smith underwent a five-year period of instruction, during which he was promoted to full commander and was trained in numerous technical projects including flight operations and night landings. The anticipated call came in 1985 when he was named pilot of the ill-fated Challenger, which exploded moments after lift-off from Cape Canaveral, Fla., on 28 Jan. 1986. All seven astronauts aboard were killed.

Smith married Jane Anne Jarrell of Charlotte ten days after his graduation from the Naval Academy. She recalled that when he asked her to marry him, he said that he was "planning to be a Navy pilot, a test pilot, a Blue Angel and an astronaut, and wanted to know if I'd have a problem with any of that." She replied, "No problem." In relating this later she added, "And that started it all." The were the parents of three children: Scott, Alison, and Erin, each born in a different state.