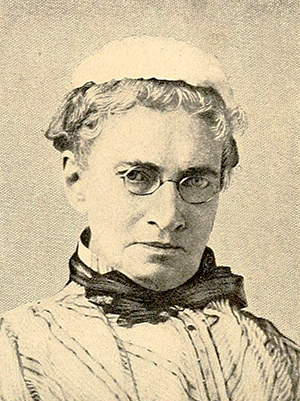 Cornelia Phillips Spencer, author and friend of education, although during a long life was closely identified with North Carolina and was the author of its first school history, was not born in the state but in Harlem, then a part of New York where her father conducted a boys' school. She was the youngest of three children: Charles became professor of mathematics and engineering at The University of North Carolina, and Samuel Field was U.S. solicitor general under President Ulysses S. Grant.

Her father, James Phillips, an Englishman, migrated to America in the late eighteenth century and took his family in 1826 to Chapel Hill, where for many years he occupied the chair of mathematics and wrote two textbooks. Her mother, who was Judith Vermeule, belonged to an old Dutch family living in the Raritan valley of New Jersey. Cornelia had no formal schooling and drew her education from wide reading, an interest in people, and contact with personages such as David Lowry Swain, former governor of North Carolina and president of the university during Cornelia's formative years.

In 1851, at age twenty-six, Cornelia met twenty-two-year-old James Munroe Spencer, a law student from Alabama, and they were married in 1855. The couple lived in Alabama, where their only child, Julia James, was born in 1859. Magnus, as her husband was called, was not strong, and his health declined until his death in 1861. In the next year Cornelia returned to her father's home in Chapel Hill. By then the Civil War was in progress, and she could scarcely maintain her occupation of tutoring young people due to the feverish interest in the conflict. On Easter Sunday 1865 Chapel Hill was occupied by Federal cavalry whose commander, Brigadier General Smith Atkins, married Eleanor Swain, daughter of the university president, in an August 1865 ceremony attended by Cornelia. To relieve her frequent depression during this period, Cornelia began collecting material for The Last Ninety Days of the War in North Carolina, a project suggested by Governor Zebulon B. Vance. In 1868 this book was published by Charles F. Deems, editor of The Watchman in New York.

Finding that writing relieved her depression due to her fear for the impoverished university, she began composing articles for various publications, including the North Carolina Presbyterian and the Raleigh Sentinel in which her series of "Pen and Ink Sketches of The University of North Carolina" appeared in 1869. She also wrote a number of biographies for Samuel A. Ashe's Biographical History of North Carolina. Her pieces appeared in the University of North Carolina Magazine in every decade from 1853 to 1900. This work early proved that she had gifts as a historian. In 1870 the university, which had been steadily losing students, was closed and its faculty was dispersed.

To Cornelia this represented a challenge, and she rose to meet it. Day after day she wrote letters to the leading men of the state propounding one question: Are you going to allow the university, one of the state's chief assets, to remain closed? No definite answer came until 20 Mar 1875, which happened to be Cornelia's fiftieth birthday. A telegram from Raleigh announced that the legislature had passed a bill allowing the university to reorganize and assuring it of some financial support. For the reopening, on 15 Sept. 1875, Cornelia wrote a triumphant hymn. She also seized the rope to the campus bell, which she rang in joy. During this time she assisted the North Carolina Geological Survey by making maps and diagrams, preparing computations, and arranging, labeling, and cataloguing cabinets of specimens.

In 1879 she was editor of the Chapel Hill Ledger, a newspaper. The extra leisure now available to her she used in the research and writing of her second book, First Steps in North Carolina History, published in 1888 with subsequent editions in 1889, 1890, 1891, and 1892. She was also interested in the environment, especially trees and wildflowers, and she was active in protecting Battle Park from development. Cornelia painted china as gifts for friends and helped other widows and harried mothers with their household chores. In 1894 she went to live with her daughter, Mrs. James Lee Love, the wife of a Harvard instructor, and this closed her life in North Carolina. In 1895 the university awarded her the honorary LL.D. degree.

Cornelia Phillips Spencer, The Last Ninety Days of the War in North Carolina (1866) and Selected Papers, edited with an introduction by Louis R. Wilson (1953).

"Cornelia Phillips Spencer (1826-1908) and Spencer Hall." The Carolina Story. UNC University Library and The UNC Center for the Study of the American South http://museum.unc.edu/exhibits/names/cornelia-phillips-spencer-1826-1908-and-spencer-ha/ (accessed February 6, 2013).

Chapman, John K. "Seeking Historical Truth at UNC: Taking the Next Step Toward Becoming the University of the People." lecture prepared for “Remembering Reconstruction at Carolina: A Community Conversation,” a conference sponsored by the Chancellor‟s Steering Committee for Remembering Reconstruction at Carolina and the UNC Center for the Study of the American South, October 2, 2004. http://www.uncsouth.org/site_images/csas-more/Seeking_Historical_Truth_by_Dr._Chapman_.pdf (accessed February 6, 2013).